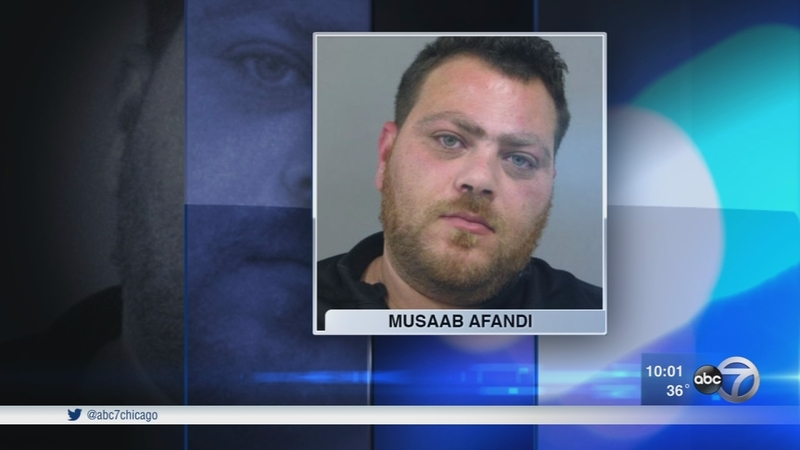 SKOKIE, Ill. (WLS) -- A Glenview man is charged with kidnapping and sexual assault after he allegedly posed as a rideshare driver to attack two female passengers.

Skokie police said in two separate incidents in February and March 2017, they received 911 calls from women reporting they had been sexually assaulted by a person impersonating a rideshare driver.

Police said the victims told them they had ordered an Uber to pick them up outside different Chicago bars/nightclubs on the North Side. After being picked up, the victims told police the driver took them to a location in Skokie where he sexually assaulted them in his vehicle.

Skokie police said the victims were able to give them information leading to an arrest. They arrested Musaab Afandi, 33, of Glenview, Ill., on Monday, March 20, and charged him with three counts of aggravated criminal sexual assault and two counts of aggravated kidnapping.

Afandi appeared in bond court Tuesday and was denied bond. He will next appear in court on April 11.

"Hearing things like this, it's terrifying. You have to be really careful. I always, always make sure the car matches up," said Heather Guilfoyle, customer.

Rideshare services reminded customers to be conscious of safety, and offered tips to help them protect themselves.

Riders should only take trips with drivers requested through the app, and never accept solicitations from drivers who just pull up and offer rides; there are no "street hails" with ridesharing apps. Riders should also match the vehicle description in the app - make, model and license plate - with those of the arriving vehicle.

"I think it really highlights additional measures that people need to take to be more alert and be more aware, and to make sure that the Uber driver that's there is actually for them," said Jessica Wilson, customer.