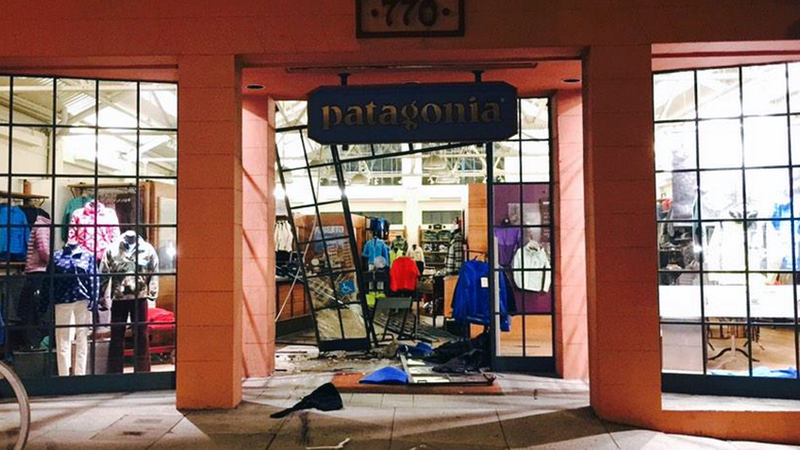 SAN FRANCISCO -- San Francisco police are investigating a smash and grab burglary at the Patagonia store near Fisherman's Wharf. Two men backed a U-Haul van through the front door of the store, grabbed merchandise, loaded up the van and fled the scene.

The sound of the U-Haul van crashing through the front door of this Patagonia store woke up Diego Munoz who lives next door.


"It's pretty brazen to have that happen in a neighborhood that's mostly families and quiet at night," said Diego Munoz, San Francisco.

He says they worked quickly and looked like they had possibly done this before.

Look from inside the #Patagonia store in SF after smash & grab . pic.twitter.com/fE95Ri7V0T

"I only saw them grab an armful before they took off," said Munoz.

"The robbery happened at 3:30 in the morning on North Point Street at Hyde. Some other units saw the U-Haul van and they did try and pursue it," said San Francisco Police Dept. Sgt. Fitz Wong.

One more from the smash and garb at the #patagonia store, merchandise all over sidewalk. pic.twitter.com/4iv2rhQT9O

The manager of the store did not comment on camera, but told ABC7 News the men got away with a lot of merchandise. Patagonia down jackets start at $200. The store is checking its surveillance footage to see if it captured a good image of the men.

Erica Lieppman also lives in the building and was surprised she didn't wake up during the attack. She couldn't believe what she saw when she walked out this morning

"I always feel safe and nothing bad has ever happened," said Lieppman.

Munoz agrees that this area is generally safe. He suspects the men are long gone and won't be returning

"I like the store I like everyone who works there I see them all the time I am a little bummed. I don't feel nervous I don't think it will happen again after that," said Munoz.