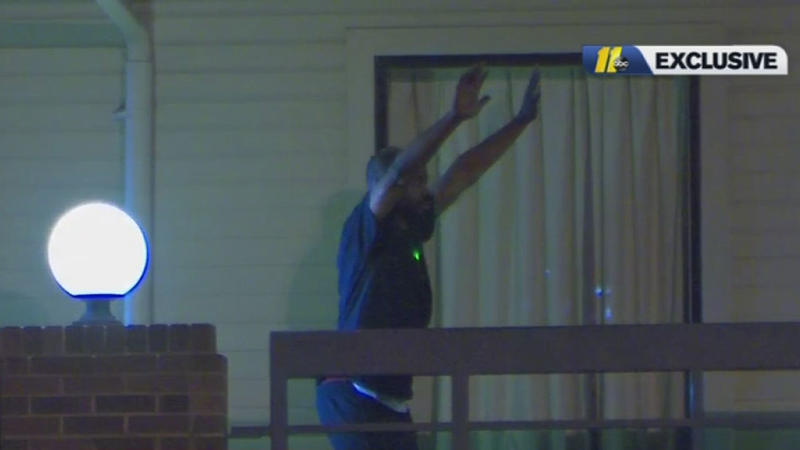 FRANKLINTON, N.C. -- The man wanted in connection with his ex-girlfriend's shooting death in Franklin County, N.C., Sunday evening has been taken into custody.


Garry Yarborough of Zebulon surrendered peacefully to authorities around 5:30 a.m. Monday after a SWAT team surrounded a Days Inn in Raleigh in the 6600 block of Glenwood Avenue.


Franklinton Police Chief John Green said Yarborough was taken to WakeMed to be treated for a gunshot wound he sustained Sunday evening during an altercation with ex Tracy Williams of Franklinton.

Green said Williams shot her ex as he attacked her around 5 p.m. in the parking lot of a Food Lion on U.S. 1 near a Cash Points ATM. Police said Williams' gun then jammed and Yarborough fatally shot her.

When officers arrived at the scene, they found Williams in front of the ATM with two guns, while the suspect's gun was missing. They believe she was trying to defend herself.

An eyewitness said she heard arguing before the shots.

Police said Yarborough fled the scene to Cornerstone Drive and fired into a home. They said he then forced a nurse living there to help him with his injury.

According to an eyewitness, the nurse said Yarborough wanted her to bandage him.

Franklinton PD chief says Garry Yarborough burned this SUV after using it to flee scene of his ex-girlfriend's murder pic.twitter.com/rEIjgiYuIZ

At the time of his surrender, Yarborough was seen limping as he raised his hands in the air. After he was released from WakeMed, he was taken to the Franklinton Police Department and charged with first-degree murder in Williams' death.

Another man, Josiah Oakley - who the police chief called an accessory in the crime - was also taken into custody at the hotel.

Authorities have said there are documented complaints of domestic abuse within the past year between Yarborough and Williams.

Yarborough has a lengthy criminal record, including drug charges and accessory to a murder.