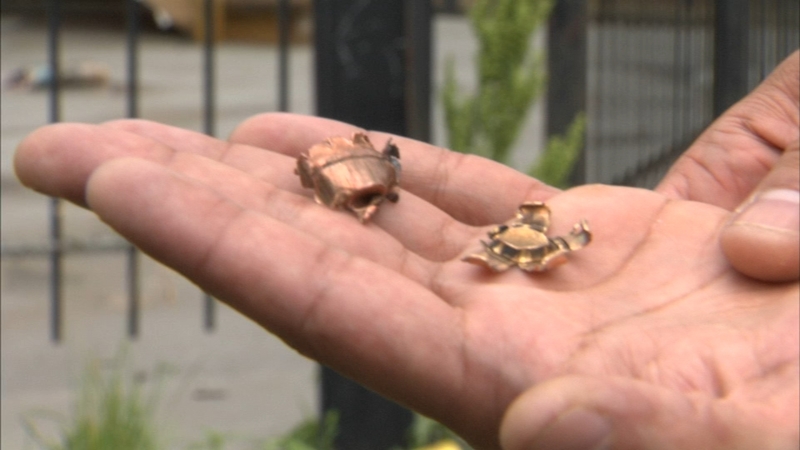 CHICAGO (WLS) -- A shoot out on Chicago's West Side over the weekend damaged cars and property, and terrified residents in the neighborhood.

There was enough fire power to rip through a wrought iron fence, and bullet holes are seen on neighbors' homes, garages and vehicles. The shootout took place along West Harrison Street near South Denvir Avenue Sunday morning.

"I believe these are AK-47 shell casings," said one neighbor, who asked not to be identified.

There were plenty of left over casings in the normally quiet Tri-Taylor neighborhood. Neighbors said around 2:20 a.m. Sunday they woke up to gunfire so loud it could be heard easily from inside their homes.

"There was about five or six shots roughly, then a pause, then right after that you definitely heard distinctive AK-47 semi-automatic rifle rounds going off," the neighbor said. "I would say close to 40 shots in total were exchanged between the two parties.

Concerned about their safety, neighbors wanted to keep their identities hidden. Residents were not only shocked that no innocent bystanders were hit in the crossfire, they were also surprised the gunfire occurred in their neighborhood. Though it is near violent North Lawndale, Tri-Taylor is far enough east that violence usually doesn't affect the changing neighborhood

"This is the first time it has ever spilled over and actually been this bad over here, luckily no loss of life thank god," said the neighbor. "It's frightening because there are a lot of children and families around."

Neighbors said home security cameras showed several young men running down an alley after some shots were fired from a car.