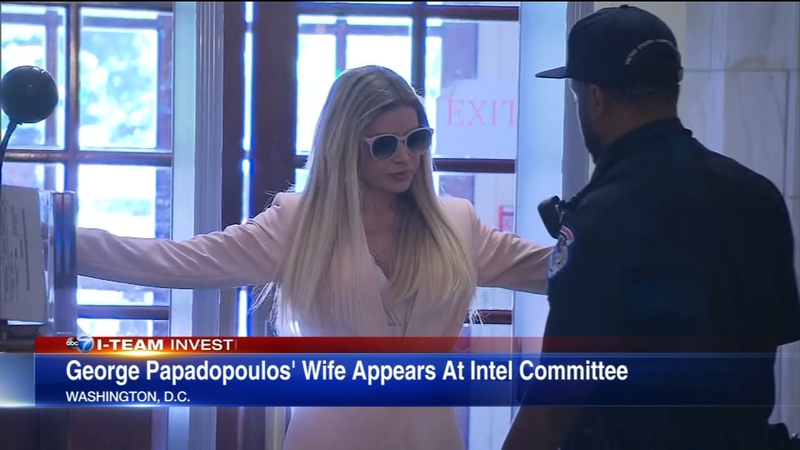 CHICAGO (WLS) -- The wife of former Donald Trump campaign adviser George Papadopoulos traveled from Chicago to Capitol Hill for a four-hour private interview on Wednesday with Democrat-members of the House Intelligence Committee.

Simona Mangiante Papadopoulos said that committee members quizzed her on how she met former Trump foreign policy advisor George Papadopoulos, who she married in a Chicago ceremony last spring. Mr. Papadopoulos pleaded guilty last year to lying to investigators about his contacts with Russians during the 2016 presidential campaign.

As part of his plea deal he became a key cooperating witness for special counsel Robert Mueller, who is investigating allegations of Russian election interference and possible collusion with Trump operatives and associates. Papadopoulos is scheduled to be sentenced on September 7.

Her remarks on Capitol Hill were not nearly as acute as those in an interview with the ABC7 I-Team last month. During our conversation Mangiante Papadopoulos said that federal investigators had targeted her husband even before he joined the campaign because of his work in Israel. She had described him as a "deep state victim."

"I actually never said explicitly that it was an entrapment from the FBI" she said on Wednesday in Washington. "I just said that he definitely was...the target of a different set-up."

Previously Mangiante Papadopoulos had compared her husband to John Dean, the notorious attorney in the Nixon White House who helped cover-up Watergate but then flipped to help prosecutors.

"I would say John Dean has many characteristics. I've been misunderstood. I didn't mean to make this comparison because I suggested that...his cooperation would lead to Trump impeachment" Mangiante Papadopoulos said to reporters outside the hearing room. "I just made this parallel (to John Dean) because he's a young guy. He worked for the campaign, and he's been involved in a number of dynamics including those setups that could reveal something very interesting and major, not necessarily in terms of collusion."

On Wednesday she repeated a key line from the I-Team interview: that George Papadopoulos had nothing to do with Russia. "The only thing he tried to do is set up meeting between Putin and Trump. Now, is that illegal? No, I don't think so" she told the I-Team last month.

Although Mangiante Papadopoulos is hoping for a presidential pardon for her husband, she said nothing had been done to move that request forward.

Mrs. Papadopoulos is an Italian-trained attorney and former employee at the European Parliament in Brussels. Her testimony behind closed doors on Wednesday was about an hour longer than the interrogation last year by FBI agents in Chicago following a subpoena issued by special counsel Robert Mueller.