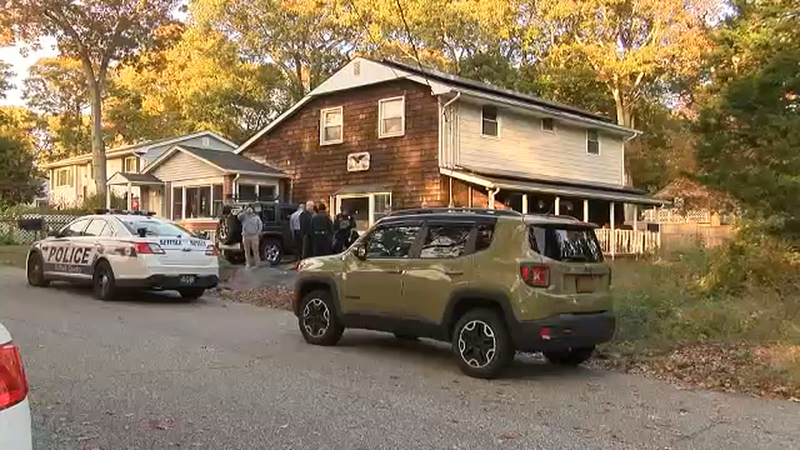 LAKE GROVE, Long Island -- A skeleton was discovered under the basement of a home on Long Island Wednesday, 57 years after a man who lived there went missing.

Police say George Carroll's adult son and his two grandchildren found the possible human remains while excavating the basement of the home on Olive Street in Lake Grove.

Carroll has been missing since 1961, six years after the family bought the home.

Michael Carroll tells Eyewitness News that it's been rumor in the family for years that his father may be buried in the basement. He disappeared when Michael was 8 months old, and the apparent story was he left "to do something" and never returned.

"It didn't just come up overnight, it's something that's been talked about for years," he said. "This is something as we grew up, you know. We heard multiple stories."

The excavation of the basement began a few years ago, but Michael Carroll said it became too dangerous and had to be stopped. It resumed recently with better search technology, and the remains were found.

DNA testing will be used to identify the remains, so for now, Michael can't say for sure it is his father. But he believes it is.

"I feel great that my dad is free from that crappy hole," he said.

He said his dad fought in the Korean War and that he would like to bury him at Calverton National Cemetery.

The remains were found about 6 to 8 feet down, and Michael said he wasn't surprised when he found them. He said he always believed his dad was in the basement.

"In my mind, I always felt that I was going to find that," he said. "I'm glad this is over and I don't have to break up my house anymore."

If it is his father, he said he believes he has an idea who may be responsible. He wouldn't elaborate, but he said anyone who may have been involved is long dead.