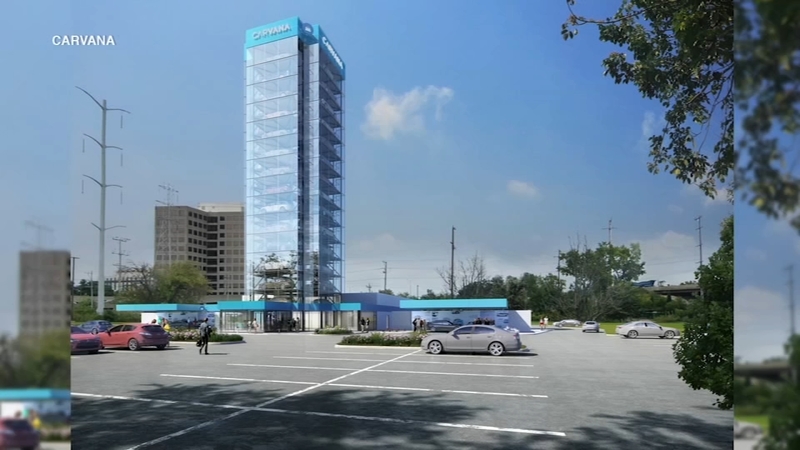 SKOKIE, Ill. (WLS) -- You may have seen it off the Reagan Tollway: a huge glass tower belonging to Carvana. Now the company wants to install another such building, only twice the size, in the heart of Skokie and in a well-known migratory bird path.

"There are so many people behind this, I believe at this point the people in power, I think they have to vote it down," said Kimberly Polka, Skokie resident. "How can they vote for it with their constituents sitting right in front of them?"

Polksa said hundreds of people plan to show up at Skokie Village Hall Monday night as trustees ponder final approval of the plan. Carvana secured unanimous consent at the planning stage for a 140 foot tower that would display its chattels over the Eden Expressway at Old Orchard.

"Billboards are not allowed on the Edens," Polka said. "This is nothing but a glass display case for cars. No people occupy the top floors of those buildings, this is a way to get a billboard in there."

Carvana said it will wrap the bottom 40% of the building in decals and film to decrease bird strikes, and they'll turn down the lights at night that would shine into the nature person and the 2,000-person Optima Woods condo complex to the south.

The tower would be near Harms Woods nature preserve right there and what is considered a big migratory bird pathway. People here and through many parts of Skokie say that is not a good idea, especially as it shows disrespect to the Illinois Holocaust Museum just to the south.

"The residents that live here feel that it would entirely change the character of the neighborhood," said Asher Bronfeld, Optima Maple Condominium Association.

Carvana promised deficit-plagued Skokie nearly $9 million in tax revenue over the next 10 years. Construction of the $10 million building, upon approval, would begin pretty much immediately.

In a statement Carvana said it "has worked inclusively to address the concerns raised at our multiple Planning Commission hearings and the Appearance Commission hearing where we received a unanimous approval for our project."

"If you don't turn off all the lights you won't get the benefit, so turning off some of the lights some of the time still leaves a lot a great percentage of the harm remains," said Bronfeld.