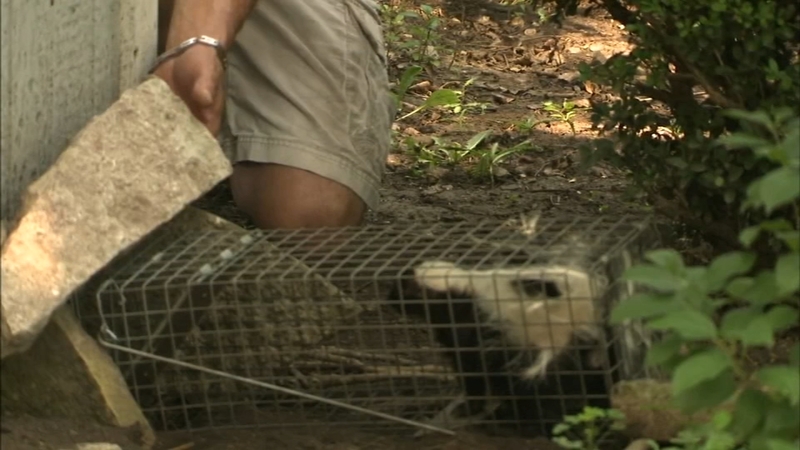 Some residents in northwest suburban Streamwood, as well as other suburbs, say that the skunk problem has become an epidemic.

And some animal control businesses are reporting that business has never been better.

The number of skunks trapped in the Chicago area went from about 6,700 in 2010 to about double that in 2016, according to the most recent stats from the Illinois Department of National Resources.

And experts say it's even worse now.

The recent warmer winters are to blame because they've allowed skunks to survive for several years.

Streamwood resident Phil Branecki first noticed the skunks in the backyard and was concerned about his kids and dogs winding up on the wrong end of the pungent skunk spray.

He said that aside from the odor, he was worried because skunks are a carrier of rabies.

Katy Lundsteen, of Suburban Wildlife Control, usually tranquilizes the skunk before carrying it out. State law then requires him to euthanize skunks.

Suburban Wildlife Control has been busy all over the suburbs for the last month or so.

In Streamwood, Brad Lundsteen, Suburban Wildlife Control, recently found a young skunk inside a cage. A family of skunks has been making its home in a hole under this backyard shed and Lundsteen had set up the cage to catch them when they come out at night.
Report a correction or typo
Related topics:
pets & animalsstreamwood
Copyright © 2022 WLS-TV. All Rights Reserved.
TOP STORIES
Chicago weather forecast includes snow into Monday | Live radar
Girl, 8, killed by stray bullet ID'd: ME
5 tax changes that can boost your refund this year
Family demands justice after 23-year-old woman found dead after date
COVID mandate draws protestors rallying against proof of vaccination
5 people found dead inside Milwaukee home, police say
$45K raised for Bradley officer recovering from deadly hotel shooting
Show More
$6M worth of cocaine laced with fentanyl seized in Wisconsin
Chicago Weather: AM snow, mostly cloudy Monday
Woman killed in 'targeted ambush' at her birthday party in CA
Police lift SUV to rescue woman, 70, pinned underneath: VIDEO
US draws down Ukraine embassy presence as war fears mount
More TOP STORIES News