'He is a hero': Small plane makes emergency landing on I-355 near New Lenox 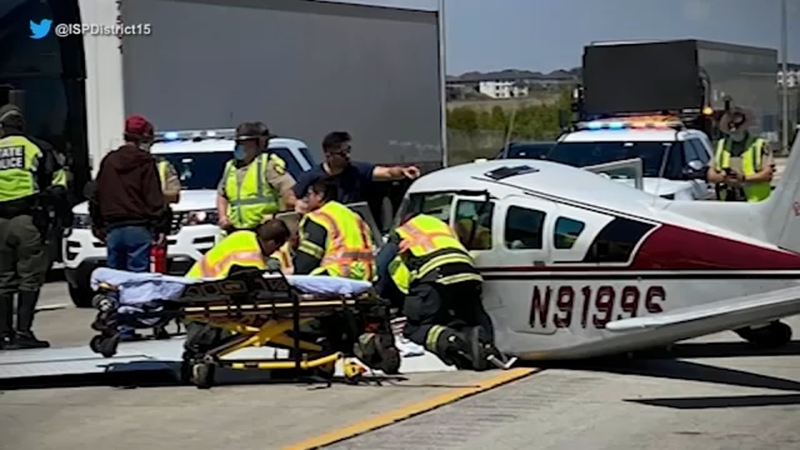 NEW LENOX, Ill. (WLS) -- Part of I-355 was closed for several hours Thursday after a small plane landed on the Tollway near New Lenox.

"It just dropped right out of the sky," said witness Ed Dieringer.

Illinois State Police responded after a small white Beechcraft aircraft made an emergency landing in the southbound lanes of I-355.

Four people were on board of the plane at the time of the emergency landing, according to family members. The passengers included the pilot and three young women, ages 15, 20, and 21, all from the south suburbs of Wilmington, Illinois.

Family members also said the pilot is very experienced and that the plane took off from Lewis University Airport. The pilot, who is the father of two of the girls, took them for a ride to enjoy the nice weather, family said.

The left two lanes are currently shut down for an emergency plane landing on I-355 S/B M.P. 1.25.

Please slow down if in the area or seek an alternate route. #iltraffic #trafficalert #chitraffic pic.twitter.com/Nzmo1mBy6W

Kirstyn McKim was one of the passengers on that plane. The 21-year-old now in the hospital with a severe back injury.

"She is in a lot of pain in her back," McKim's mom Michele said.

McKim was able to call her family moments after the plane landed on the roadway.

"She said she closed her eyes and hoped for the best. Hugged her best friend and told her that she loved her," her mom added.

The pilot has been identified by Illinois State Police as 39-year-old Jason Bufton.

Bufton's two daughters and their close friend McKim all were planning to head to Indianapolis for the day.

"More or less lost power and had to find a place to land," said McKim's step-dad, Tom Sanford.

"He is a hero. He saved all of their lives, that is for sure. It could have been way worse than it was," Michele said.

The plane was only in the air for about five minutes before making the crash landing, according to flight records.

Drivers nearby were shocked to see the plane slimming down onto the expressway.

"I did not expect it," Dieringer added. "You are just driving and right in front of you this thing drops."

Police said the emergency landing was due to unknown mechanical issues.

During the landing, family members told ABC7 that the plane hit a barrier.

Chopper7 was overhead after a small plane made an emergency landing on I-355 near New Lenox Thursday.

"I just could not believe that the way that it hit the concrete, and impacted and just stopped right away, that they would be alive. It was amazing," Dieringer said.

Drivers rushed to pull over and help until the ambulance arrived.

"I was just glad to see no blood," Dieringer recalled before adding that, "there was fuel coming out of the plane."

Three of the four people are being treated for back injuries and undergoing other medical checks at Silver Cross Hospital, the family said.