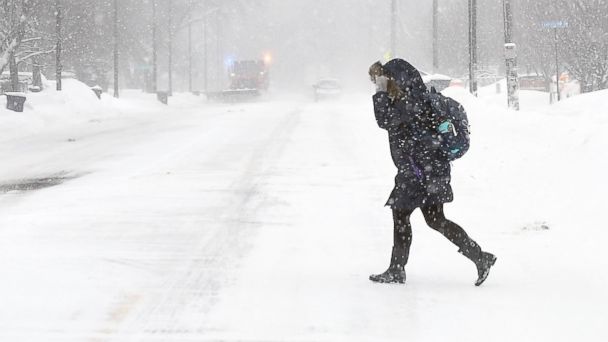 ABCNews
By MAX GOLEMBO
Snow, ice and rain are wreaking havoc on roadways throughout the middle of the country.

Some roads are blanketed with up to 1 foot of snow and some drivers are crippled by blinding whiteout conditions.

Minneapolis Public Schools are closed Friday due to the rough weather.

More than a foot of snow fell from Colorado to Michigan over the past several days, while freezing rain brought some areas from Missouri to Michigan to a standstill.

Power was also knocked out to Michigan residents.

Behind that storm, a significant chill is moving in, with wind chills 20 to 40 degrees below zero Friday in the Northern Plains.

This Arctic air will push east by Friday night, with wind chills in the single digits in the Northeast and below zero in the Upper Midwest on Saturday morning.

Meanwhile, on the West Coast, winter storm warnings and watches have been posted from Washington to California.

Portland may also see a few inches of snow.

The Sierra Nevada Mountains in California could get up to 4 feet of snow this weekend.

Rain moves into San Francisco and Los Angeles on Friday and continues into the weekend. Some flooding and mudslides are possible after heavy rain earlier in the week.
Report a correction or typo
Related topics:
abc newsnational
Copyright © 2020 ABC News Internet Ventures.
More Videos
From CNN Newsource affiliates
TOP STORIES