"It's exceeded our expectations. We're really, really thrilled. It's history . And all of us involved recognized that," said Chuck Adams, executive director and founder of Indivisible Aurora, a progressive community advocacy group that pushed for the parade permit.

Members of the city's LGBTQ community started planning the parade 18 months ago after wanting to commemorate those killed in the Pulse nightclub shooting in Orlando, Fla.

"We aren't one Aurora until we include everyone. This parade represents something we've never done -- absolute inclusion of every community," said Aurora Mayor Richard Irvin.

While city officials signed off on the parade permit, there were some who protested the event on Sunday morning. Flyers with phrases such as "Love kills Pride" and "Homosexuality is a sin" were put up near the start of the parade route denouncing the event.

Aurora's first ever Pride Parade kicks off Sunday at noon.

"I was coming into town about quarter to six and saw all the signage and I thought, 'Oh cool, someone decorated' and then I got a little closer and I realized what it was, so I was a little taken aback," said Aurora Special Events Manager Gina Moga. "We knew there would be some protesters, but we're prepared for that."

Organizers said they anticipated backlash and there were a small group of protesters. However, their message was drowned out by parade-goers.

"We're called by Jesus to love one another. This morning in worship we talked about loving one another and there's no room for hate. We want to welcome and accept all people," said Rev. John Bell, of Wesley United Methodist Church in Aurora.

The parade is one of many pride festivities continuing in the Chicago area all week. Chicago's pride parade is scheduled for next Sunday.

And while the Aurora parade lacked the crowds and many of the risqué costumes usually associated with pride, people didn't seem to mind one bit. They were excited to have an alternative to Chicago's much-larger event.

"The crowds get so big down there it's really nice to have something here to come to here," said parade attendee Sadie Pristave.

The parade started at noon at River and Benton, with the route going east on Benton to Broadway before continuing left to Downer and ending at River and Downer.

Gov. Bruce Rauner joined in the kick-off festivities. The parade grand marshal was Jim Corti, the artistic director at the Paramount Theatre. 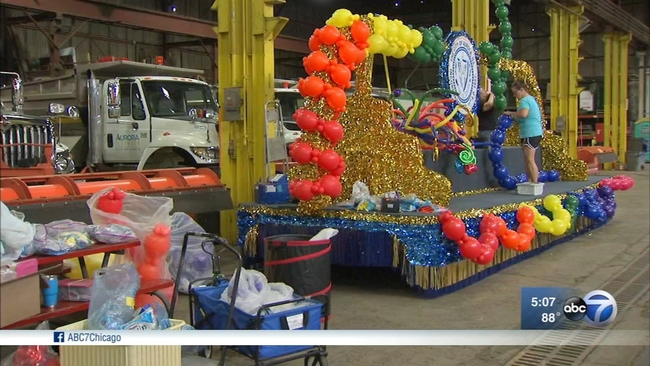