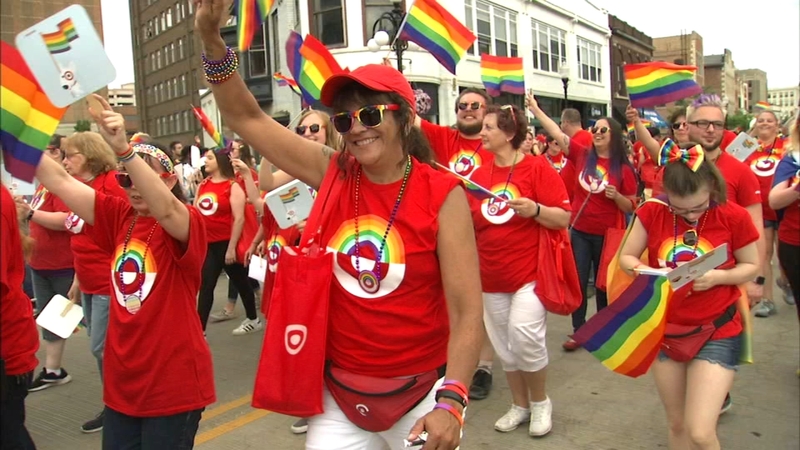 AURORA, Ill. (WLS) -- Despite gloomy skies Sunday, the streets of Aurora were bright with rainbows for the city's second annual Pride Parade.

The big event almost didn't happen at all this year due to a lack of funding, but parade organizers and advocates from Indivisible Aurora mobilized to raise more than $20,000 in less than a day.

"When we heard what happened we got together and said 'We can't allow that,' so we put our heads together and made sure that we had this parade today and look at it - it's beautiful," said Aurora Mayor Richard Irvin.

"You see, really the citizens themselves came out in force and helped us raise $21,000 in less than 20 hours," said Chuck Adams, executive director of Indivisible Aurora.

Those same citizens came out in force Sunday, lining the route from Broadway to Downer Place with rainbow flags as far as the eye could see. The festivities featured a variety of entertainment, including live music and special lip-synching performers.

"At the end of the day this is 'love is love,' you know, and love being love in a city like Aurora with what we've gone through earlier this year is an important message. It's a critical message for us as a city that's healing still," Adams said in reference to a workplace shooting in Aurora in February.

Organizers said they did have to cut the parade route a bit shorter and cut down on other amenities, but what was most important was that the show went on for everyone to enjoy.

"I'm glad to have as many supporters as we do because without or supporters we would be lost," said Running Doe, a parade attendee.