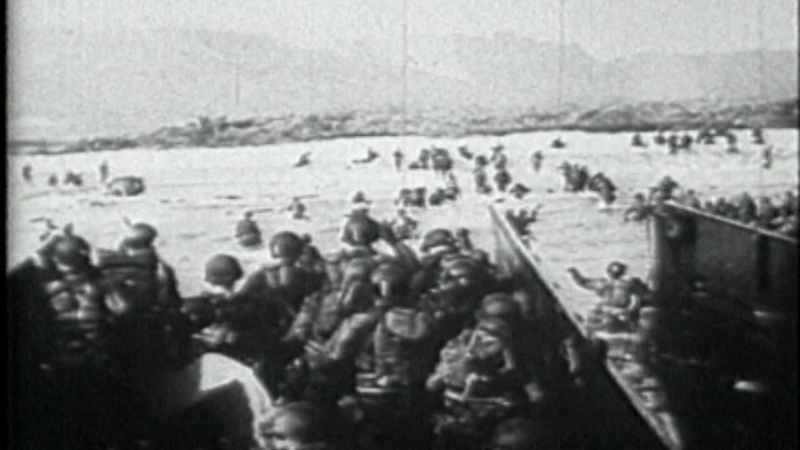 CHICAGO (WLS) -- Thursday marks the 75th anniversary of D-Day, and people gathered at Normandy Park on Chicago's Southwest Side to remember the bravery of those who put their lives on the line for freedom.

Gerald Goodman said he had one thought on his mind when he landed on Omaha Beach on June 6, 1944.

Goodman was a young Army captain with the 20th Engineers Combat Battalion headed straight for Nazi-fortified beaches. Their boat was hit by German artillery on the way.

"I felt the heat of the explosion, but fortunately I had no wounds," Goodman said. "You run down the ramp and run through the water and try to keep upright and not stumble and fall and seek some kind of cover on the beach."

Private Benito Morales was with the 9th infantry division, he landed a day later.

"I didn't know what a war was. You're going out to die," Goodman said.

Two Chicago veterans wanted to share their stories to honor their generation's legacy.

Men who were practically boys were cut down German fire all around him.

"In my mind I never thought I was going to go through something like that," Morales said.

Morales and his unit moved east across Europe, they reached the Ludendorff bridge in Germany.

"That was the last stand they had so they were throwing everything at us," Morales said. "My buddy right next to me it split his body."

An Army citation said Morales ignored his own safety, he helped evacuate 11 casualties. That earned him the Bronze Star Medal. He also received the French Legion of Honour in 2016.

"It's duty. You took an oath, you have a job, you have comrades who are sharing this with you, and that's it," Good man said.

Goodman returned to Normandy 49 years after D-Day, but Morales can't imagine visiting, he is still shaking each day from post-traumatic stress disorder.

"My mind is not ready to go back," Morales said.

On this anniversary, he was celebrated at Normandy Park with the community, honoring the thousands who didn't come home.

"Oh, I think it's important to tell people that there's still people alive who were there who did this," Goodman said.