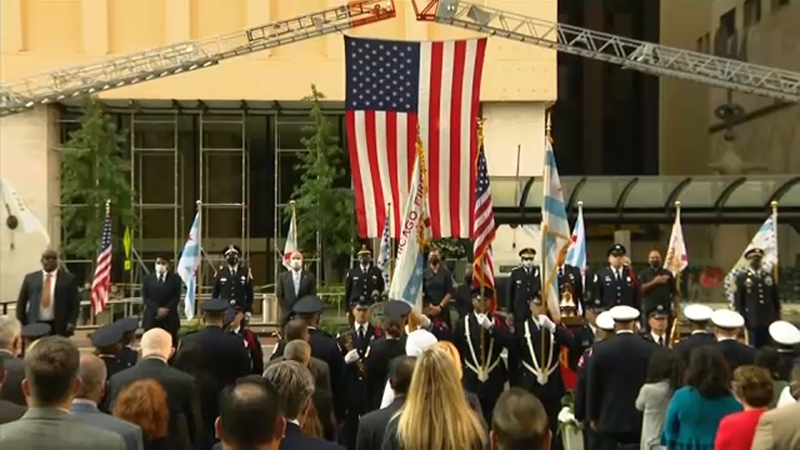 Several ceremonies and tributes took place in the Chicago area in honor and remembrance of the nearly 3,000 lives lost.

RELATED: What it was like at Ground Zero on 9/11
EMBED More News Videos

The I-Team reflects on the 9/11 attacks with the first responders from Chicago who rushed to Ground Zero to help.

"I stand before you with a heavy heart... it's still hard to think about," said Chicago Mayor Lori Lightfoot.

The solemn day of remembrance in Chicago began with a large gathering at Daley Plaza to honor those who lost their lives in the deadliest act of terrorism on U.S. soil.

Among the nearly 3,000 people killed that day, 441 first responders.

"They made the ultimate sacrifice. And in this nation will always remember and honor them," said Chicago Police Superintendent David Brown.

The morning ceremony included an all-call on the radios for law enforcement.

"May they rest in peace knowing that their country has not forgotten about them," a voice over the radio said.

A flag was raised today on the roof of a fire station at ground zero in honor of fallen Chicago Police Officer Ella French. The flag will be presented to French's mother.

A flag was raised on the roof of a fire station at ground zero in honor of fallen Chicago Police Officer Ella French.

CPD chaplain, Father Dan Brandt, led the ceremony. He was joined by two Chicago Police Officers, members of the New York City Fire Department and the U.S. Marines. The flag will be presented to Officer French's mother.

A Chicago man opens up to I-Team about experiencing 9/11 and his surprising decision to enlist in the Army.

Over at the bean, members of the Marine Corps walked a half marathon.

"It never leaves. It never escapes my mind. It is something a simple photo or video makes it feel like yesterday, said Marine Andrew Aiello.

Each step was to honor the 13 U.S. service members killed in the Kabul Airport Attacks, as they reflected back two decades on the war in Afghanistan.

"When I finally turned 18, I had the chance to enlist and do my part," said Marine Juan Perez."I did a tour in Afghanistan in 2010."

City of Chicago honors the nearly 3,000 lives to the September 11th attacks with a ceremony at Daley Plaza.

Perez said the tragedy inspired him to fight for our country and those who paid the ultimate sacrifice.

"There are people that stand up and protect this nation, and take the fight to the end, and do what has to be done to keep our borders and our land safe," Perez said. "I think that we forget it at times and we should not just remember on these days."

Oak Brook resident Craig Donnelly is the nephew of a FDNY Lieutenant Kevin Donnelly, who was among the hundreds of first responders who lost their lives trying to save others.

To show support for the Oak Brook Fire Department, Craig handed over one of his uncles NYFD helmets at a ceremony held at Soldiarity Field.

9/11 is a day forever etched in many memories. The September 11th terror attacks took place exactly 20 years ago Saturday.

"They are in the business of saving lives. They don't think of themselves. They think of their job. They have to save lives," he said.

Sue Mladenik also spoke publicly for the first time about that day 20 years ago. Her husband Jeff was a passenger on Flight 11.

"People can't forget. We can't be complacent," she said. "My husband life was important and he mattered."

There was also a helicopter fly-over by the Lake County, Indiana Sheriff's Office, and a 21 gun salute in Hammond.

In Naperville, the Exchange Club honored Naval Commander Dan Shanower, the west suburban native who died in the attacks.

September 11, 2001 was a defining moment for Muslim Americans, and forever changed their lives in the years after.

"What 20 years has shown us is that from devastation, comes healing," said Mayor Steve Chirico with the City of Naperville.

That ceremony began at the exact moment Flight 11 crashed into the north tower.

Aurora also held a ceremony, with six Aurora firefighters who were deployed to New York City following 9/11 as special guests.

The first division Museum at Cantigny Park hosted a ceremony at Cantigny Park in Wheaton, next to the museum's outdoor exhibit which is comprised of two structural steel beams from the former World Trade Center buildings in New York.