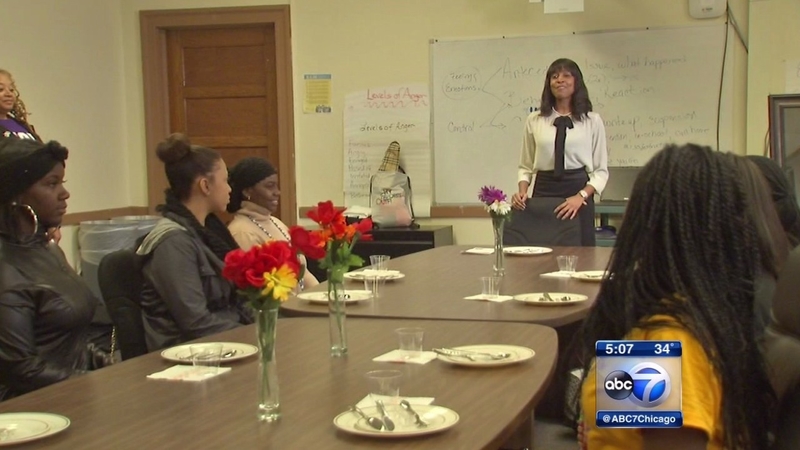 CHICAGO (WLS) -- A group of CPS students have been invited to the White House to meet with First Lady Michelle Obama and to share their concerns.

Nine young ladies who have been working on issues including leadership, goal setting and building self-esteem will get to show off what they have developed on the inside. But first, they're getting a chance to show off a little bit on the outside.

Some students at Bowen High School on Chicago's South Side get to go on a shopping spree without ever leaving school grounds. A pop-up boutique called My Favorite Outfit brought donated clothes and accessories for them to shop for items to wear to the White House.

"When I found out that I was going I was like so excited," says Claire Sinvil, a junior at Bowen, "and I get to meet the President and the First Lady."

The students are part of a mentoring group called Working on Womanhood. It is the female companion to Becoming a Man" or BAM, the group that last year inspired President Obama's My Brother's Keeper initiative to help young men of color. Participants say the girls group is equally effective.

"It has helped me improve a lot," says sophomore Naje Oshibanjo. "I've done better academically, as well emotionally and in other ways."

WOW, as it's called, is run by the non-profit Youth Guidance, and operates in 26 Chicago public schools. These girls were chosen for improvements in grades and attendance. They also each wrote an essay describing how they live their core values.

"Those five core values are self-awareness, emotional intelligence, healthy relationships, visionary goal setting and leadership," explains Dorthea Brown, one of Working for Women's counselors. "All of our girls implement those core values in and out of school."

When in Washington, the young ladies will not lack in refinement either. They are getting hands-on lessons in etiquette. Parents and grandparents are beaming.

"I've seen a lot of improvement since I've been observing them," says Inez Whitney, whose granddaughter is in the group. "They're so excited. They're more mature and they already are young ladies and they are proving their point and they're going to make us very proud."

The group will have a congratulatory meeting with Mayor Emanuel on Feb. 10. Then, they will head to Washington, DC for a three-day visit on Feb. 17.