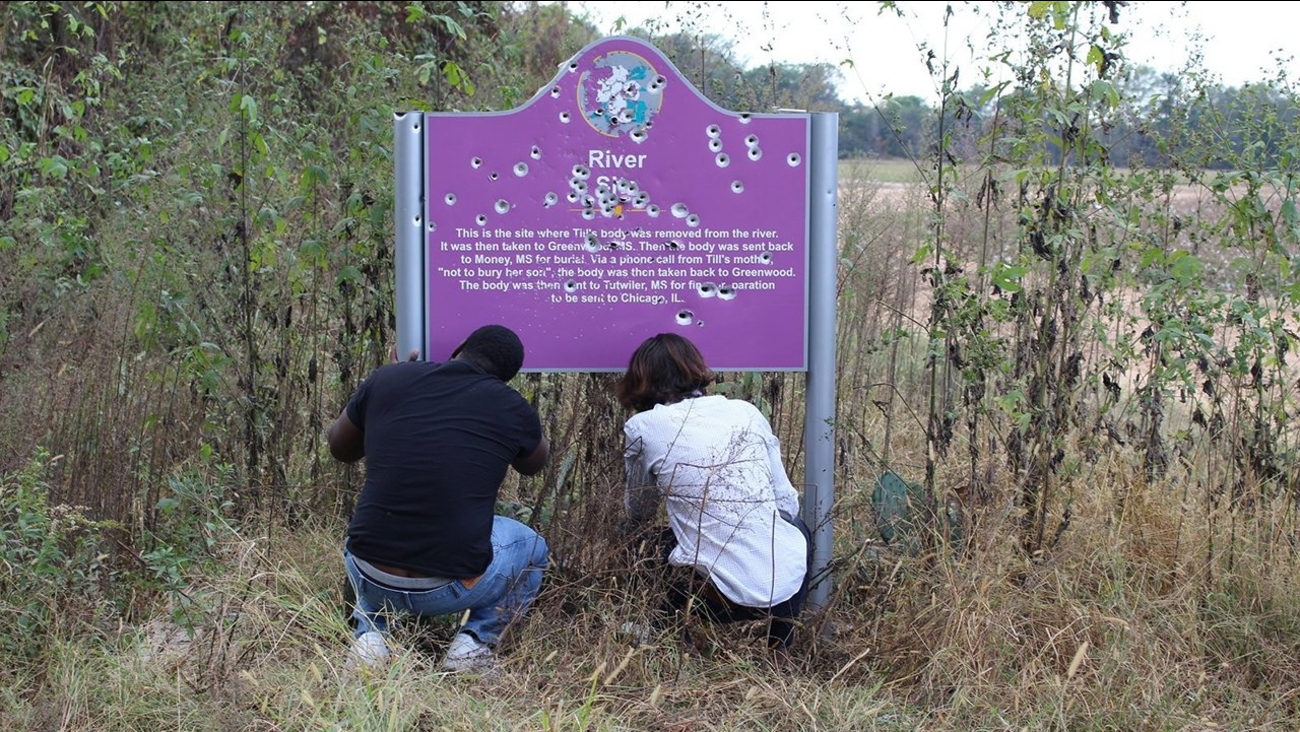 The second version of the memorial sign in 2016. (CNN)

A sign memorializing Emmett Till, who was brutally murdered 63 years ago, has been vandalized -- again.

It's the third sign to go up at the site outside Glendora, Mississippi, near where the 14-year-old's body was pulled from the Tallahatchie River in 1955. And it was installed just 35 days before it was pierced with bullets.

The people who put it up might just leave it that way.

"For 50 years, our community lived in silence, and there's those who want to erase history," he told CNN. "We've been through that."

The marker's rough past

Emmett Till's memorial signs have seen trouble from the start.

The first sign went up along the river in 2007, 52 years after Emmett's death. In 2008, it was stolen, Weems said. Nobody ever found it.
Eight years later, its replacement was riddled with bullet holes in multiple acts of vandalism, Weems said. That sign now sits in the interpretive center's museum.

And last month, the third sign was put up near the river. Only 35 days went by before it was shot up. A professor from nearby Delta State University found the sign defaced by bullet holes, Weems said.

"Whether it was racially motivated or just pure ignorance, it's still unacceptable," he told CNN.

No one seems to know who's responsible for the incidents. Two spokespeople from the Tallahatchie County Sheriff's Office did not know of any arrests or findings made related to any of the signs.

What Weems does know is that the sign is about two miles down a gravel road -- a bit of a trek from town -- and shooting it was no accident.

To Weems, it's a sign of systemic racism the area has long struggled to combat.

"It's a stark reminder that racism still exists," he said.

A killing that shook a nation

It was the summer of 1955 in the Jim Crow South. Emmett, more affectionately known as "Bobo" by the people who loved him, had traveled to Mississippi from Chicago to visit his great-uncle.

Once there the teen was falsely accused of flirting with Carolyn Bryant, a 21-year-old at the time. Bryant and her husband, Roy, owned a grocery store in Money, Mississippi.

Four days went by. Then, in the middle of the night on August 28, 1955, Roy Bryant and his half-brother, J.W. Milam, paid Emmett a visit.

They rousted him from his bed and ordered him into the bed of a pickup truck. They beat him mercilessly. Then they took his life by shooting him in the head.

To get rid of Emmett's body, his killers strapped a 75-pound cotton gin to his neck with barbed wire. That way he'd be weighed down when they threw his battered body in the Tallahatchie.

Bryant and Milam went on trial less than a month after Emmett's body was pulled from the river. There were eyewitnesses who saw them. The men admitted they had kidnapped Emmett.

That evidence wasn't enough. Bryant and Milam were acquitted by an all-white jury.

The grimmest part: a year later, his killers confessed. Double jeopardy laws let them get away with it without facing another trial.

But his death horrified the nation -- Emmett's mother insisted on an open-casket funeral so "all the world" could see what was done to him -- and helped spark the embers of what became a nationwide civil rights movement.

How the community is moving forward

The Mississippi community's made a lot of progress since then, Weems said, but there's still plenty of work to be done.

Moments like these are defining, he said. There are two options: letting the vandalism divide a community that's already divided by opinions, politics and races.

Or, he said, it can help get things back on track.

"It's difficult to celebrate anything when you know there's so much work to go," he told CNN. "But we still keep coming back to the table."

For one, the National Park Service is considering designating sites related to Till's lynching as national park areas. With this designation, defacing the signs would become a federal felony, and federal funds could buy cameras to keep a watchful eye on the sites.

Another part, Weems said, is getting justice for Emmett.

It was just last month that the US Justice Department decided to reopen the case.

"It's never too late to have justice," Weems told CNN.