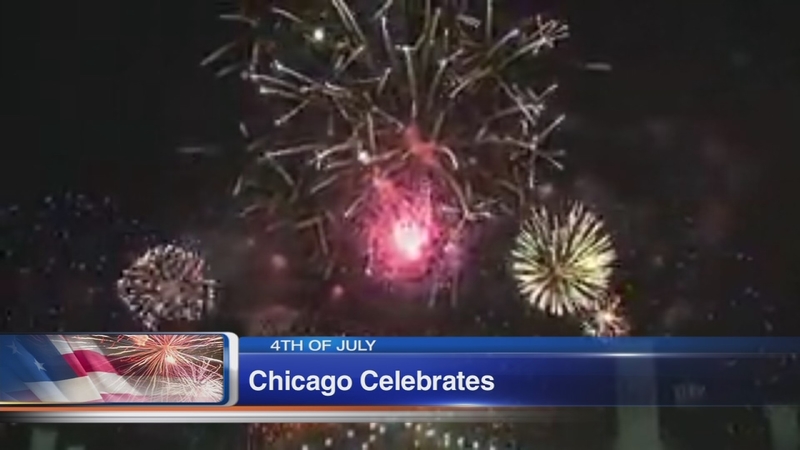 Baseball, apple pie and Navy Pier on the Fourth of July. Huge crowds were at the pier, where hundreds of thousands gathered to watch the annual fireworks display. Gates opened at 10 a.m. and closed when the pier reached capacity around 8:30 p.m. The Navy Pier garages were full by approximately 3:30 p.m.

A spokesperson for Navy Pier recommended visitors take public transportation. Those using ride-sharing services will be required to walk west on Grand to meet their ride.

Offsite parking was available at Grand Plaza Self Park, Ogden Self Park and Millennium Lakeside Garage until those garages reach capacity.

"Well I love the fireworks, I just love all the people gathering and all the, just the activities in the air. It's just fun. I'm just looking forward to people having fun," said Pat Hamel, at Navy Pier to watch fireworks.

"I'm not sure we're going to have a good spot, but that's okay. Even if we end up just walking by as the fireworks go off, it'll still be beautiful," said Darlene Easson, at Navy Pier to watch fireworks.

If you were planning to watch fireworks at Navy Pier, the key was arriving early to stake out a spot. The Navy Pier trolley will run until midnight and there will be extra service on CTA trains and buses. In past years, the pier has reached capacity and closed hours before the show.

"We're out seeing lots of people dressed in their red, white, blue. And it's great to see everybody showing their patriotism today," said Navy Pier visitor Tracy Tierney.

"It's been awesome. We've been on the Riverwalk and Michigan Avenue and now Navy Pier, and it's a great day to be in Chicago," said Mike Gallagher, another visitor to Navy Pier.

"There will be security at every checkpoint, every entrance of the pier and everyone is subject to bag checks and vehicle inspections and it's all part of our efforts to keep everyone safe," said Navy Pier spokesperson Payal Patel.

Despite the enhanced security, visitors say it won't spoil their fun.

"It was different, but really is was nice, though. You feel relaxed, free, walking around and seeing the different families," said Shelly Fields who's visiting Navy Pier.

Throughout the Chicago area, people will flock to fireworks, parades, cookouts, and beaches to celebrate Independence Day.

Temperatures in the 80s and sunny skies also make for an ideal beach day. The Chicago Park District said there are three beaches that are closed or have advisories today:

Additionally, all vehicular traffic along the lakefront to beaches between West Foster Avenue and West Montrose Avenue has been closed. Pedestrians and bicycles can continue to access the roads.

The Chicago Park District reminded all beachgoers to swim with a buddy, stay close to small children, clean up after yourself, and follow the instructions of the lifeguards and public safety personnel working.

Police were blocking traffic, searching bags and strictly enforcing all the rules.

Police are out in force at the beaches. They're blocking traffic, searching bags and strictly enforcing all the rules.

Rick Martinez was manning the grill. It was quite the spread to feed a large gathering of his family and friends.

Martinez said he was advised by police to be careful while cooking and that there is no grilling east of Lake Shore Drive. When it comes to disposing of hot coals, there are red cans in designated grilling areas. Because of the high volume of beachgoers expected, the Chicago Park District was strictly enforcing grilling area restrictions.

"It really comes down to safety because people will dump hot coals on the ground and a little kid can walk right through it," said Chicago Police Cmdr. Paul Bauer, 18th District.

There are other security measures in place, too.

Police officers at North Avenue Beach were checking bags and coolers to make sure alcohol is not brought on to the beach.

But overall, it's an enjoyable day for those spending it with hundreds of thousands of others.

For some, it's another item on their Chicago to-do list.

For others, it was about carving out a space to spend the rest of the day that had a good enough vantage point for the fireworks.

"It's the Fourth of July, you gotta party good," said Martinez.

It's not just a parade and fireworks happening this Fourth of July in Aurora. They're also hoping to set a head-banging world record.

The annual Independence Day Parade in west suburban Aurora stepped off from Benton and River Streets started about an hour late Tuesday because of a problem getting power to the reviewing stand. The delay dampened no spirits, though. The parade celebrated Aurora's past and future, as well as the town's diversity and history.

This year's parade theme is "Party On, Aurora," in celebration of the 25th anniversary of the movie "Wayne's World," which was set in the western suburb.

Like in years past, dozens of floats, bands and performers were just the start to a day of entertainment for a city being praised for its diversity and the election of its first black mayor, Richard Irvin.

"This is my first my Fourth of July parade. So today is about not only independence and about freedom but about celebrating Aurora," said Aurora Mayor Richard Irvin.

Following the parade, there was a bell ringing ceremony at the Aurora Historical Society's Tanner House, which played host to a pie-eating contest and other activities.

"We certainly are happy to do that, put some history back into what the celebration is all about," said John Jaros with the Aurora Historical Society.

Riveredge Park is center stage as a live performance of Queen's "Bohemian Rhapsody" will be a backdrop to a Guinness World Record attempt for the most people head banging simultaneously.

Aurora fireworks will start at 9:35 p.m.

Children in north suburban Glenview got to participate in a Fourth of July celebration by riding their bikes.

A group from pre-school to age nine rode in the town's Children's Bike Parade before the traditional holiday parade marched on the scene.

A HOT DOG KIND OF DAY

Americans will eat 150 million hot dogs on Independence Day, and by and large they'll do it at picnics.

According to the National Hot Dog and Sausage Council, the number of hot dogs consumed on July 4 is enough to make a line from Washington D.C. to Los Angeles more than five times. And 65 percent of people polled by WalletHub said they plan to attend a picnic on the holiday.

And what will they wash all those dogs down with? Beer. WalletHub said the Fourth of July is America's no. 1 beer-drinking holiday.

July 4 is a shopper's holiday, and WalletHub said that 27.6 percent of people they surveyed plan to buy patriotic merchandise just for celebration. WalletHub also found more than $800 million will be spent on fireworks.

The Fourth is also a big online shopping day, and there are deals everywhere. Several chains are giving deep discounts to items popular in the summer.