WLS
By Megan Hickey
CHICAGO (WLS) -- A new memorial for a fallen officer was unveiled at the Chicago Police Academy Friday morning.

The K9 for Cops statue honors Officer Thor Soderberg. It's a colorful work of art honoring a Chicago hero and is a reminder of an officer's sacrifice and the legacy he left behind.

The latest class of recruits at the Chicago Police Academy never got the chance to work with Officer Thor Soderberg. But thanks to a new monument, now they'll think of him every day they walk in the front door.

It's been a long road for Soderberg's widow, Jennifer Loudon. She's been thinking of her husband every day for the last seven and a half years.

In July 2010, the 43-year-old officer was shot by a suspect who got a hold of his gun during a struggle and then left him to die.

"It's the weirdest combination of joy and grief," Loudon said.

The K9 statue is part of Chicago's K9 for Cops public arts campaign launched by the Chicago Police Memorial Foundation. Funds were raised by individual donations.

The statue commemorates the officer's love of triathlons, teaching and even his wedding day.

"It feels like a living thing as opposed to a death thing he was so vibrant and so alive so it's nice that there's representation of life," said Loudon.

"Jennifer's face was priceless to me," she said.

Vazzana said she was honored to be part of such a special tribute that will keep Soderberg's memory alive for years to come.

"We'll never forget but this is such a nice reminder of the legacy and he was such a positive person," she said.
Report a correction or typo
Related topics:
societychicagowest looppolice officer killeddogpublic artchicago police department
Copyright © 2020 WLS-TV. All Rights Reserved.
RELATED 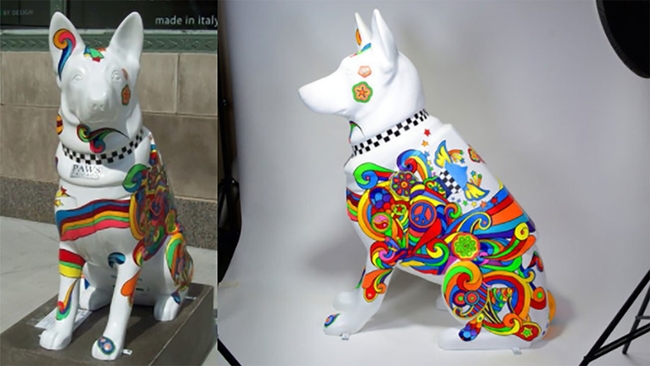