WLS
By Ravi Baichwal
CHICAGO (WLS) -- The Starbucks coffee chain is closing more than 8,000 stores in the afternoon for racial bias training Tuesday. This comes after two black men were arrested at a Philadelphia location last month.

Independent coffee houses in Chicago are trying to use the Starbucks incident as a teachable moment.

"We've got the ambiance. We don't just sell coffee and tea, we sell an experience and it is based on community, where coffee and community meet," said Sip and Savor Proprietor Trez Van Pugh.

Trez Van Pugh holds court at Sip and Savor in the rapidly gentrifying part of Bronzeville near 43rd and Vincennes.

Students, business people and athletes fill the laid back surroundings -- drinking coffee or not.

"It is a good atmosphere that's laid back, with cool people, all good food, good coffee, it is a good place to just come down and sit and just enjoy yourself," said Chicago Bears rookie John Franklin III.

Sip and Savor is not so much capitalizing on the troubles of Starbucks, which found itself apologizing for the Philadelphia incident last month that led to the arrest of two men for essentially doing nothing, but reminding people how important coffee houses have become. Van Pugh has three locations and is opening a fourth on the South Side.

The CEO of Starbucks has apologized for what happened. And there's sympathy here for the chain.

"Having a coffee house function in a way that does not alienate people particularly based on race and things like that and whether or not you have bought something or not, when they are still driving business into a place, that is something they got to deal with a bit better," said Dwayne Hirsch with Hirsch Network Real Estate.

And for the owner, if there ever is a reason to feel uncomfortable with a customer, he says his staff has been trained to about the bias to employ.

Even though many Starbucks will be closed, most of the 7,000 licensed stores, such as those operated by major grocery stores, hotels, universities and airports are expected to stay open.
Report a correction or typo
Related topics:
societybronzevillegrand boulevardchicagostarbucksrace relationsbusinesssmall businesscafesrestaurantscoffee
Copyright © 2020 WLS-TV. All Rights Reserved.
RELATED 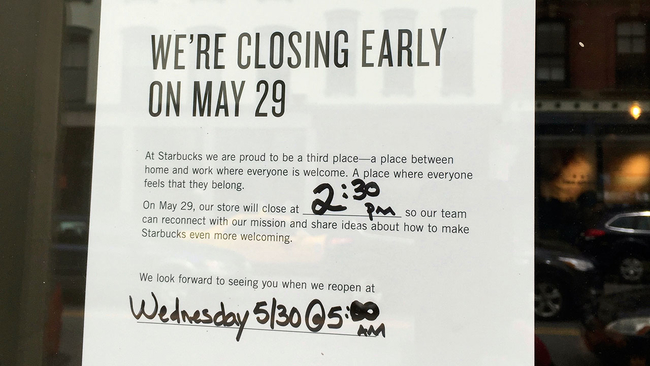