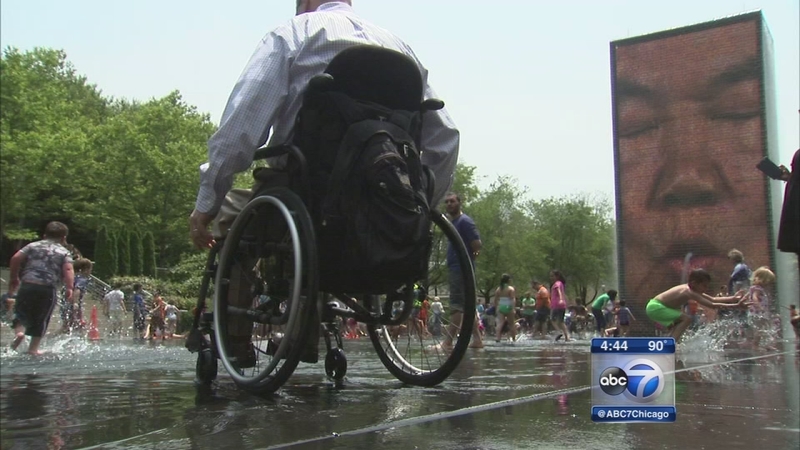 CHICAGO (WLS) -- Twenty-five years ago the Americans with Disabilities Act (ADA) was signed into law. The legislation prohibits discrimination against people with disabilities and sets standards that require accessibility in public places.

Now proponents are looking toward the future and hoping more businesses will exceed those minimum standards. A great example of that initiative is Chicago's Millennium Park, ADA 25 Chicago officials say.

Jack Catlin considers Millennium Park one of Chicago's crown jewels. Not only because of its beauty and splendor, but because of its universal design.

"Great attention has been paid to the smallest detail and to the largest concepts," Catlan said.

Those details include picnic tables with wheelchair space, tree grates with holes too small to snag a white cane, accessible seating in the concert area and ramps designed for everyone to use rather than separated to another area, the park incorporates many elements that make it more inclusive.

"The Crown Fountain is very interesting. One of the elements of it is a reflecting pool and usually a reflecting pool is recessed from the surrounding surface, four, six, eight inches and then the water reflects the two pylons at each end. But they realized that they wanted kids to play in this area, so to do that, they raised the base of the reflecting pool flush with the surrounding area and then put a very small half inch gap around it so the water just goes through that gap so the surfaces are flush," Catlin said. "It means that all people can use it the same way. It means that little kids that are using wheelchairs and kids in strollers, that sort of thing, can easily push out on to the surface and play like all their friends would play on that surface."

Most people walking through Millennium Park never notice the elements that make this area so accessible. For example, the 960-feet long bridge that connects to Maggie Daley Park is designed with a much gentler slope than is required by the ADA. It doesn't require handrails and is easier for people using wheelchairs.

Emily Harris is the executive director of ADA 25 Chicago, a non-profit helping the city to celebrate the milestone 25th anniversary of the law. The group has an installation housed in the park for the year.

"We wanted to put this exhibit here to both celebrate that Chicago is pretty unique in having a park of this stature that's designed with such thought to making it accessible. And, also because we want it to be a model for every building, for every park, but also for every program. We need universal design in education. We need it in employment. We all need to think about going beyond clients with the ADA and think towards making a world that opens its doors toward everyone," Harris said.

In a quest to become even more accessible, this summer marks the first season that movies in Millennium Park this year will be captioned. There are a series of events celebrating the ADA's 25th anniversary -- including a parade on Saturday. Find the full list at http://ada25chicago.org/calendar/.