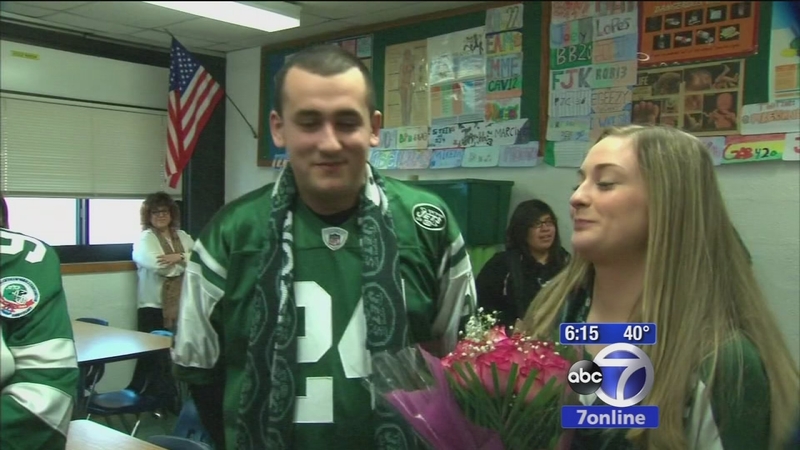 LEVITTOWN, N.Y. -- The New York Jets offered their services to a Long Island high school student who requested their help for a special prom proposal.

It was a regular morning for Mike Pagano at Division Avenue High School in Levittown, until, that is, his friend Sarah Kardonsky strangely walked into his classroom and sat next to him.

Seconds later, the lifelong Jets fan got the surprise of his life.

"Mike, it's Saalim Hakim from the New York Jets," he heard. "Will you go to prom with Sarah?"

Kardonsky was able to wrangle not one Jets player, but nine of them for her invite.

"My friend Sarah wanted to know if you would to go to prom with her," TJ Barnes said.

"Will you go to prom with Sarah?" Chris Owusu asked. "Say yes."

"So, Mike, what do you say?" Kardonsky asked as the video ends. "Do you want to go to prom with me?"

Here's the backstory to the magical moment.

Mike, who has high-functioning autism, had asked Sarah to the prom recently, but she already had a date.

But the more she thought about it, the more she realized she had an opportunity to do something special for him.

"He really deserves it," she said. "He's such a great kid. Everyone loves Mike...I'm just really happy that he's happy."

She explained to her other date she wanted to make sure Mike wasn't flying solo to the prom. Then she got the idea, first Instagramming Hakim, a wide receiver.

And it took off from there.

"It feels pretty special," Pagano said. "I mean, I never thought this would happen."

His parents were equally thrilled about her efforts.

"I couldn't ask for anything more for him," mom Lori Pagano said. "This is like him winning the gold."

"I wasn't expecting anybody to do that for my son," dad Nick Pagano said.

The only person missing from Sarah's montage was President Barack Obama, but she did try to get him.

"Joking around, I said to her, 'Sarah, President Barack Obama is on the phone,'" mom Kate Kardonsky said. "And there was dead silence, and she goes, 'No joke, mom, I called him yesterday.' I said, 'You did what?'"