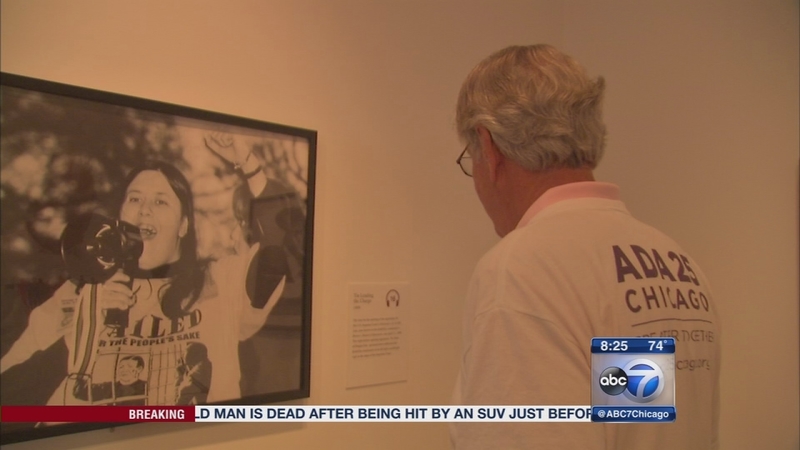 CHICAGO (WLS) -- The battle to pass the Civil Rights Act of 1964 was long and hard, and it was critical. It outlawed discrimination based on race, color, religion, sex, or national origin. But people with disabilities say it left them out. But that didn't count them out.

Twenty-five years later, it's a celebration of a hard won victory. But the road to equal rights and equal access for people with disabilities has not been a smooth ride.

"The more I got involved in the disability movement, the more they said it's still legal to discriminate against us and that sort of started the whole disability rights movement," says retired Senator Tom Harkin of Iowa.

Harkin was first exposed to disability issues while growing up with a brother who was deaf. He went on to sponsor the landmark legislation that would become the Americans with Disabilities Act signed into law in 1990.

Renowned photojournalist Tom Olin was there to capture the struggle. While other photographers often focused on people's disabilities, he says he took pride in showing their power and raw emotion. He remembers one of his favorites.

"That person was just full of empowerment, full of... Just it was not your typical person with a disability that you would pat on the head," Olin remembers. "This person, you pat on the head and they might bite it off."

A collection of Olin's photographs is on display at the Chicago History Museum. He captured numerous demonstrations and sit-ins: Protesters staking out public transportation, Civil Rights leaders joining in as one rider simply proclaims "Access is a civil right," and the iconic image of people crawling up the capitol steps to protest having no wheelchair access.

"People could understand right away there was something wrong. It was just like Rosa Parks going to the front of the bus," Olin says. "It was a shot heard round the world. It was our shot. It was a people with disabilities shot. "

A lot has changed in the past 25 years, but disability activists say there is still much work to be done, particularly in the areas of employment and education. If you'd like to see the complete photo exhibit, you can check it out at the Chicago History Museum through April 10, 2016.