WLS
By Tanja Babich
WAUCONDA, Ill. (WLS) -- Both a reminder of grief and a symbol of triumph, Wauconda fought for a piece of the World Trade Center and a place to remember the lives lost on September 11th.

"The normal sight of planes landing at O'Hare and Milwaukee soon disappeared, and all we saw were a couple of F-15s screaming toward Chicago," Kirk Morris, Gold Star father, said.

Morris was determined to make this happen. Fourteen years ago he was fishing on Lake Michigan with his then-16-year-old son, Geoffrey. Geoff was so impacted by the events of that day he later enlisted in the Marines and sent these words home in a letter before he was killed in Iraq.

"Every time we go across the desert, the waves of the sand remind me that I'm on the boat," Morris said. "God, I wish I was home."

For all the lingering sadness, the dedication was an occasion to give thanks.

"And I didn't really realize it until a few weeks later that that little old lady that was counting out dimes and nickels that took five minutes to pay for her gas before I could pay for mine saved my life," Scott Specht, FDNY fire marshal, said.

A five minute delay kept New York City Firefighter Scott Specht far enough away from the first Trade Center tower that he did not perish when it came down. This is the first 9-11 anniversary he has spent away from his hometown.

"It reminds me that it's not an issue that just affected New York City, as much as it affected the entire country and the world," Specht said.

"It's amazing and it's emotional how many people actually show up and still come together as a community," Amy McClure said.

They are united by patriotism, sympathy, soil that was collected from Shanksville, Pennsylvania, and a single steel beam. 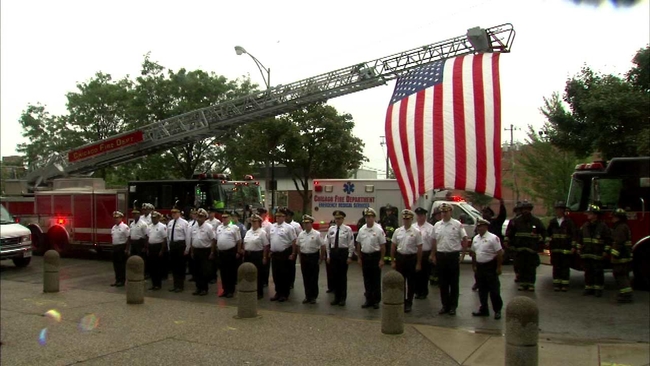