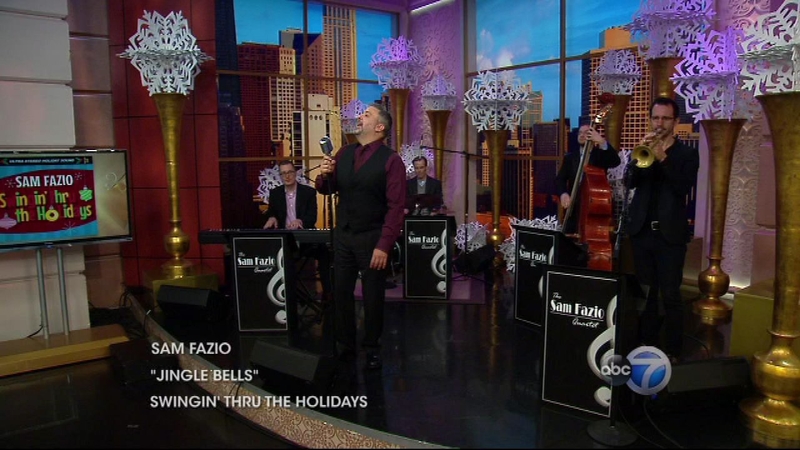 CHICAGO -- Chicago native Sam Fazio gets our audience in the holiday spirit with some favorite holiday tunes.

Check out Sam's latest CD, "Swingin' Thru the Holidays!" on his official website.

COMING UP FOR SAM FAZIO:

Sam Fazio made his return to the Chicago music scene in 2009 and has been making an impact ever since. Sam is a graduate of DePaul University's School of Music. Sam's repertoire includes a unique mix of American standards, swing tunes and pop classics. His heartfelt interpretations showcase his soulful, yet classic style.

Sam is currently on hiatus from the Coq d'Or at the Drake Hotel, where he held residency for the past 5 years. Sam has performed at many of the prestigious Chicago clubs including Andy's Jazz Club, Jazz Showcase, Katerina's, Maxim's, Pete Miller's and Space. In Summer 2012, Sam performed a sold out show at the legendary Feinstein's at The Loews Regency in New York City.

Sam performs at many festivals and events across the country--including Taste of Chicago, Chicago Jazz Festival, Chicago Bulls Pre-Game show, Taste of Melrose Park, Taste of Oakbrook, Oakley Street Festival, Elmwood Park Summer Concert Series, Indianna Wine Fest, and Jazz on the Lawn at the Honeywell House. Sam has performed a several casinos in Las Vegas and the Chicagoland area such as MGM Grand, Horseshoe, and Grand Victoria. Sam also performs shows at performing arts centers throughout the midwest.

In addition, Sam has performed at many private parties and corporate events at venues like Chicago History Museum, Hyatt Regency O'Hare, McCormick Place, Park West, Swissotel, United Center, University Club of Chicago, and the Wit Hotel. Sam has also performed as a vocalist for several big bands including Stitely, David Rothstein Music, Swing Assembly, and Big Band Boom. Sam has also recorded jingles and demos for a variety of clients.