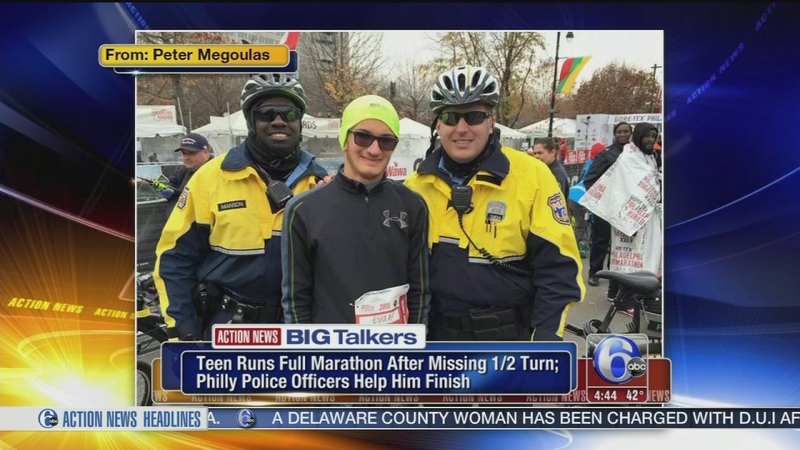 PHILADELPHIA -- It's quite an accomplishment to run a half marathon. But accidentally running a full marathon?

That's something else entirely!

On Sunday, he set out to run 13.1 miles in the GORE-TEX Philadelphia Half Marathon.

His brother Peter and family gathered at the finish line, ready to cheer Evan on.

Worried that something may have happened, Peter reached out to Sergeant Phil McAlorum from the Philadelphia Police Department.

Peter says the 9th District Officer immediately asked him to send a photo of Evan to his personal cell phone so he could distribute it to other officers.

That's how they discovered that Evan had somehow missed the turn for the half marathon and was still running!

18th District Officers Clarence Mason and Eric Leary caught up with the teenager in Manayunk.

Once they determined he was okay, and still wanted to run, they followed him back to the Philadelphia Museum of Art - biking at least 6 miles with him.

Peter says after the race, all of the officers insisted on getting pictures with Evan and congratulating him on his unexpected success.

As for Evan's accidental marathon time?

Peter added that his brother, Evan, has a learning disability and gets things confused easily.

He went on to say that he initially submitted the post to Action News because he wanted to highlight the Philadelphia Police officer's efforts to help Evan, but the additional support and well-wishes have meant the world to his brother.