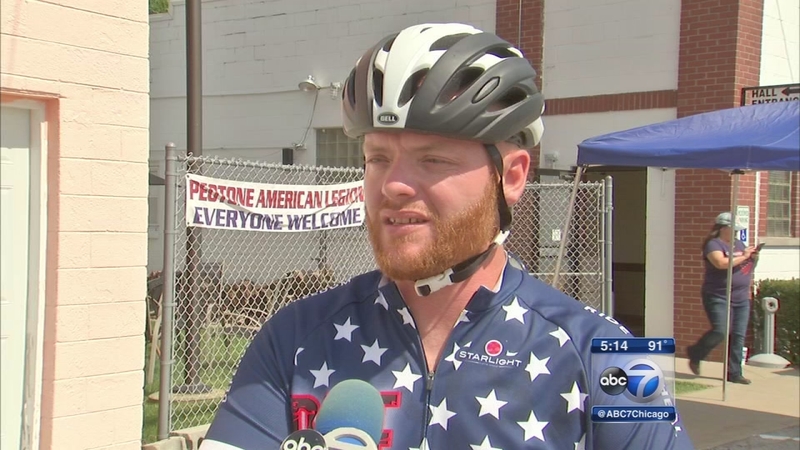 PEOTONE, Ill. (WLS) -- There are nearly 3 million veterans of Iraq and Afghanistan in the United States. One in five returns home with some form of post-traumatic stress disorder (PTSD) or depression, which can lead to suicide.

On Tuesday, one veteran set off on what he hopes will be a life-saving journey.

"For a while I wouldn't leave my house. I'd stay in my bedroom. I didn't like going outside. I'd keep all my blinds closed," James Dennis said.

It's been a long road, all leading up to a nearly 1,000-mile bike ride from Peotone, Ill., to Aubrey, Texas. Dennis hopes it will raise enough money to pay for two veterans like him to receive what could be life-saving therapy.

"I lost a really close friend to suicide three days after he was turned away from the VA. He's my motivation and why I'm doing this. Because maybe I can do this and save at least one life," Dennis said.

It is estimated that PTSD leads to 22 suicides a day among veterans. For a while, the father of three thought he might become one of them. A two-time Purple Heart recipient, Dennis served in Iraq in the 101st Airborne Division in 2010.

And while he's learned to cope with the continued anxiety, he's now made it his mission to raise awareness.

Kicking off his ride from Peotone's American Legion on Tuesday, many - including first responders, veterans and their families - came out to wish him well.

"To see James embracing all those feelings I saw a couple of years back and doing something, doing something positive. It's emotional," said Sue Wackerlin, Adopt A Solider.

Accompanying Dennis on his ride is fellow veteran Jon Miller. He will be driving alongside him, providing logistical assistance and much needed moral support.

"Trying to keep him motivated along the way. Because I know for him, it's going to be a long process," Miller said.

Dennis will arrive in Aubrey, Texas on September 17, having hopefully met his goal of raising $60,000 dollars to help veterans with PTSD.