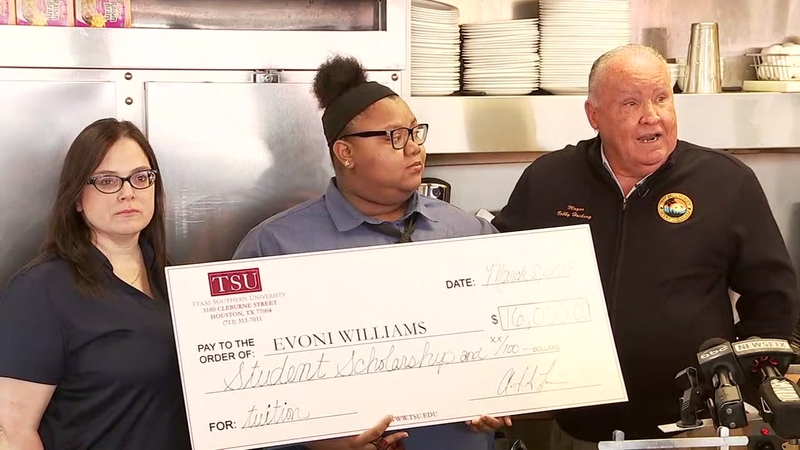 Evoni Williams, a waitress at the La Marque Waffle House, gets a scholarship from TSU after her act of kindness

Waitress Evoni Williams worked the hectic morning shift at the Waffle House in La Marque, Texas, saving up for college. Amid clanking plates, a sizzling grill and customers on the go, an elderly man timidly asked Williams to cut his ham. She did. Someone snapped a photo that spread across social media. Now Williams has a college scholarship.

"I was just like, 'Sure! If you need help, that's what I am here for,' " the 18-year-old waitress said. "My cook was calling my name to pick up food I had on the board, but I continued to cut his ham."

The two engaged in a short chat at the bustling breakfast counter, something the senior patron appreciated.

"I have been in and out of the hospital for the past five weeks," Adrien Charpentier said. "It started with pneumonia."

Known as "Mr. Karaoke" by the restaurant staff for belting tunes at the local senior center, Charpentier said many of the waitresses kindly cut his food for him.

"I can hold a fork fine and dandy -- but to cut it looks like I'm going to stab somebody," he said with a laugh.

Recently Charpentier has been experiencing muscle weakness in his hands.

"It means a lot. I need help and the waitresses issue it to me."

But on this particular day a customer waiting to be seated caught the gentle gesture between Williams and Charpentier on her smartphone and uploaded it to her Facebook page.

That photo soon touched the hearts of many La Marque residents. It even gained the attention of La Marque Mayor Bobby Hocking, who saw the post on Facebook.

"Somebody tagged me and it immediately, it just touched my heart," he said. "It's so wonderful that the younger generation cares about the older generation."

Simply hitting the "love" button on this post wouldn't be enough. Instead, Hocking honored Williams by proclaiming March 8 as Evoni 'Nini' Williams Day.

"There is a lot of love in La Marque, Texas, and we intend to perpetuate that," Hocking said.

"It is awesome. ... I feel excited and happy," Williams said.

In addition to receiving her own day, Williams' story caught the attention of Texas Southern University President Austin A. Lane, who also saw it on social media. La Marque is near the university's hometown, Houston.

Many of the college's alumni saw Williams' story and wanted to help. Through the power of social media and good will, Texas Southern University awarded Williams a $16,000 scholarship.

She hopes to study business administration and one day open her own restaurant or hair salon.

"We wanted to reward Evoni's act of kindness and let her know that good deeds do not go unnoticed," said Melinda Spaulding, an administrator at Texas Southern University.

"She has the character of the type of students we want at Texas Southern University."

"Evoni always has a smile on her face," said Waffle House manager Mundarius Wright. He said Williams' act of kindness reflects the sense of community his staff tries to serve alongside each hot meal.