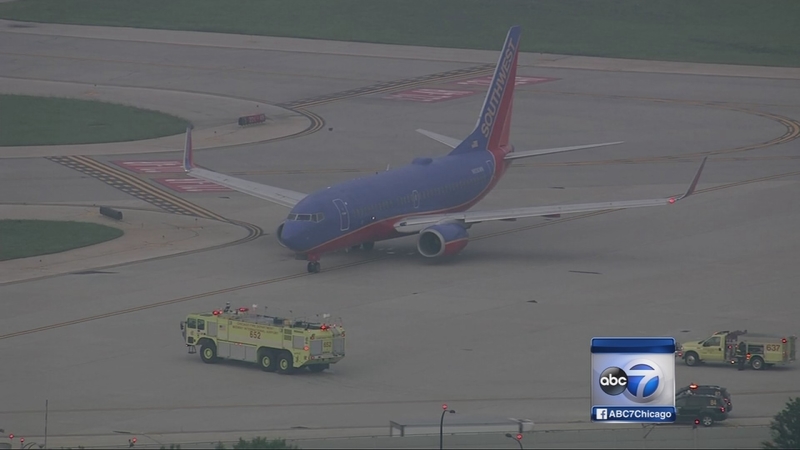 CHICAGO (WLS) -- For the second time in 48 hours, a Southwest Airlines flight aborted takeoff at Midway Airport. Flight 4384 was on the runway when the pilot of another plane reported seeing smoke coming out of the right engine.

Amy Schubert, a passenger on the Philadelphia-bound flight, said the plane was taxiing down the runway around 6 a.m. Friday when it was directed to the side and stopped. Emergency crews surrounded the aircraft.

"All of a sudden a bunch of SUVs were circling the plane and then a couple of fire trucks showed up," Schubert said. "The captain got on and told us people behind us reported seeing flames."

Southwest officials said another pilot reported seeing "potential signs of a mechanical issue." Schubert said she did not see smoke or fire coming out of the engine.

After an initial investigation Friday morning, officials said they had "not found any sign of fire or smoke from a maintenance perspective... but the plane remains in maintenance."

The Boeing 737 was escorted back to a gate so the passengers could exit and board another plane. When asked if she was nervous to be getting on another Southwest aircraft, Schubert said she wasn't worried.

"Not at all. I'm not at all nervous. I'm glad they're extra careful," Schubert said.

That plane landed safely in Philadelphia just before 10 a.m. Friday.

Friday's incident comes on the heels of another in which a Southwest flight was aborted during takeoff due to an engine fire. On Wednesday night, flames shot out of Boston-bound Flight 3299. The pilot was able to correct the plane and the fire was extinguished as passengers were evacuated.

The back-to-back incidents don't seem to be deterring passengers.