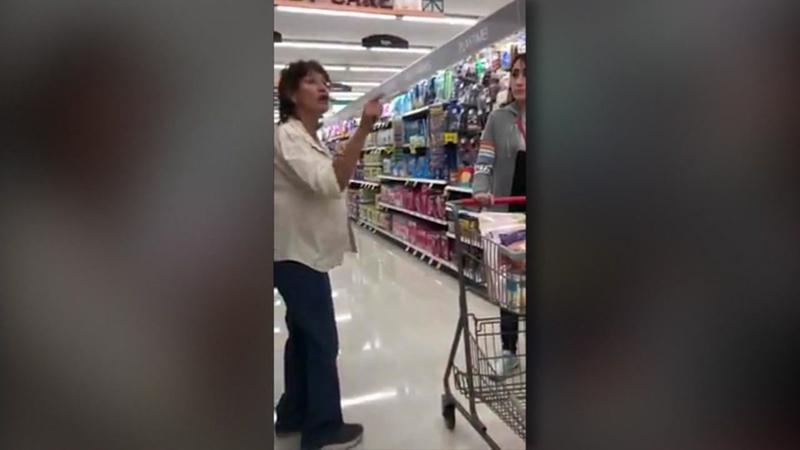 RIFLE, Colo. -- A Colorado woman defended two Spanish-speaking women as they were berated in a grocery store.

"Nobody should be treated that way, ever," Kamira Trent said.

Trent is now a viral sensation for her good deed.

Monday, while grocery shopping, she came upon a woman yelling at two women, insisting that they should "speak English" and be "American."

"I mean I was disgusted. I couldn't believe I was hearing that," Trent said.

That's when Trent's instincts kicked in.

"They were scared. They didn't know really how to react to it," Trent said. "They both tried to walk away from her and she wouldn't let them walk away."

When Trent confronted the shouting woman, someone else in the store recorded what happened.

"You leave these women alone! Get out!" Trent shouts in the video.

The woman who was berating the Spanish-speaking woman, later identified as Linda Dwire, begins to tell Trent, "You come from a different generation...."

Trent does not let her finish. "No I do not. I have respect. You do not harass people," she said.

Dwire pointed at Trent and told her, "You will lose your country. You know what? You will lose this country."

That video got a lot of praise online.

"It is absolutely comforting to see people will stand up for other people," Steve Levin of the Anti-defamation League said.

Levin said confronting people like Trent did can be dangerous. Still he praised Trent for her courage to do what's right.

"We need to make sure people understand Colorado is not a place that stands for hate, but instead we're going to be respecting people," Levin said.

Trent said she has no regrets about the confrontation, and she hopes the attention this video is getting will inspire others do do the same.

"Stand up. Speak up. Don't sit there and let it happen. It's not OK," Trent said.