Aaron Rodgers: Packers will be OK 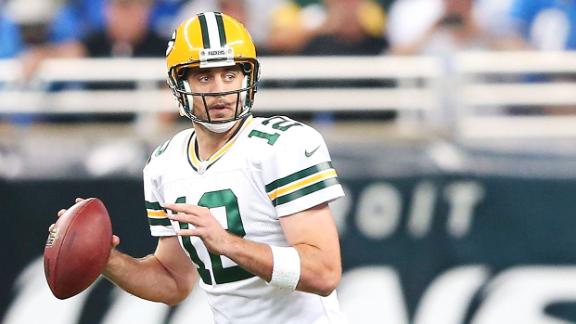 GREEN BAY, Wis. -- Aaron Rodgers had a simple, yet direct message for Green Bay Packers fans who are panicking over the team's 1-2 record and the quarterback's own slow start.

"Five letters here just for everybody out there in Packer-land: R-E-L-A-X," Rodgers said Tuesday on his ESPN Milwaukee radio show. "Relax. We're going to be OK."

Through three games, the Packers' offense ranks just 28th in total yards while Rodgers' completion percentage of 62.7 percent is on pace for the lowest mark of his career. Rodgers has failed to throw for 200 yards in two of the three games already this season.

Rodgers missed receiver Jordy Nelson on a fourth-down play late in Sunday's 19-7 loss to the Detroit Lions that would have been a 20-yard touchdown pass. His 162-yard passing performance against the Lions was the second-lowest total in a game that he started and finished.

The 30-year-old former NFL Most Valuable Player is coming off a season in which he missed seven games because of a broken collarbone. Since his return in Week 17 last season, the Packers have won just two of five games (including playoffs).

So what's wrong with Rodgers and his offense? Well, to suggest it has anything to do with his injury or the fact he recently began dating actress Olivia Munn caught Rodgers by surprise when he was told that those have been among the reasons fans have given on social media to explain the early-season struggles.

"Everybody's wondering that?" Rodgers said on his show.

"Those are so idiotic it's not even worth responding to either one of those," he added.

Rodgers To Packers Fans: Relax
Jerome Bettis discusses whether he thinks Packers fans should be concerned with Green Bay's start to to the season, or whether quarterback Aaron Rodgers is justified when he indicates the team will be alright.

Running Into Trouble Early
The "NFL Live" crew breaks down the NFC team that made the playoffs in 2013 that is in the most trouble this season.
Related topics:
sportsespnnfl week 4jordy nelsongreen bay packersaaron rodgersrelaxquarterbacknflstrugglesqboffense
Copyright © 2020 ESPN Internet Ventures. All rights reserved.
More Videos
From CNN Newsource affiliates
TOP STORIES