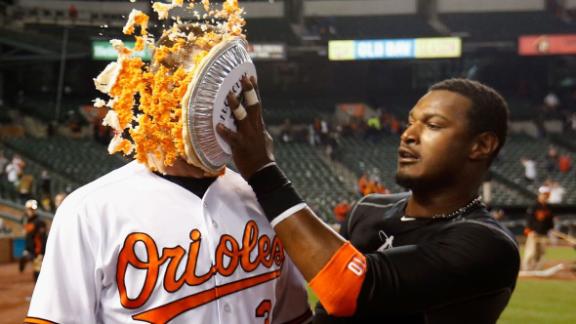 Looks like the Baltimore Orioles can't deny the pie.

Before the season, the team banned Adam Jones' ritual of smashing pies in teammates' faces to celebrate victories, citing safety concerns. That went out the window after Matt Wieters delivered a walk-off Opening Day win with a single Monday. Jones got Wieters as he was being interviewed on the field.

The Orioles outfielder was asked about it after the game.

"You want to talk about the game or pies?" Jones asked, according to The Baltimore Sun. "I'll probably get a letter. I'll plead the Fifth."

He was asked again.

"I've lost control of the team again," Showalter joked, according to the Sun. "Pick the battles worth winning, right? It had some kind of orange look to it. It looked very cakey to me."

The pie ritual had become so ingrained that Jones arranged with a local bakery to furnish the pies. Not all players were fond of Jones' antics, but Wieters said he had been warned.

"I don't know if it was just him rebelling, or maybe just one last show," Wieters said, according to the newspaper. "We'll see. He's got to keep everybody on his toes. ... I didn't have any complaints."