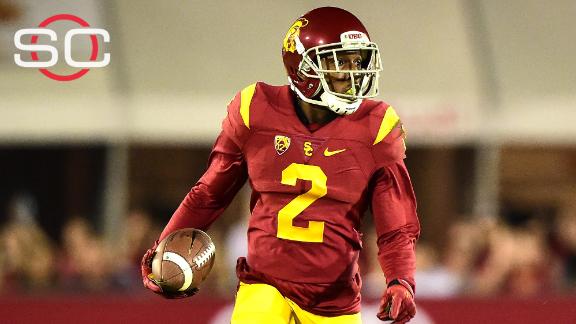 USCstar cornerback Adoree' Jackson will be excused from spring practice so that he can focus on his pursuit of qualifying for the 2016 Rio Olympics in track and field.

Trojans coach Clay Helton announced Sunday that Jackson, the Pac-12 champion in the long jump this year, would skip spring practices to become a full-time member of USC's track and field team.

Jackson had an outstanding sophomore season as an all-purpose threat and was named to the All-Pac-12 first team and a finalist for the Paul Hornung Award as one of the country's most versatile players. He was was the Trojans' No. 1 cornerback, their second-leading receiver and their top kickoff and punt returner, scoring five overall touchdowns.

But Jackson, who was promised the opportunity to focus on spring track by Helton during his recruitment, also is an accomplished long jumper. He finished fifth in the long jump at the NCAA championships this past June despite being only a part-time member of USC's track and field team.

"If it was up to me, where my heart is, I would want to go out there [with the track team in the spring]," Jackson said, according to the Los Angeles Times. "I'll just see what's best overall for me and for the team."

The 5-foot-11 Jackson will need to improve, however, to make the U.S. national team, which has a minimum qualifying standard of 26 feet, 5 inches for its 2016 Olympic trials in July.

Jackson won the Pac-12 championship with a distance of 25 feet, 3 inches and he leaped 25-11 at the NCAA championships.

Jackson said he likely will still attend football meetings in the spring but will physically focus on the long jump.

"I'm going to talk to my dad," he said, according to the Orange County Register. "But for me, I'd rather go out there in track and really try to win a national title in the long jump and try to compete for the Olympics."