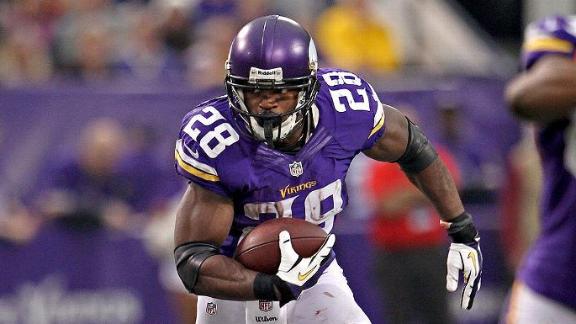 NEW YORK -- Adrian Peterson empathizes with former players who are suing the NFL over painkillers and other medication they were given during their playing days.

Some 750 former players contend team physicians and trainers across the NFL routinely -- and often illegally -- dispensed powerful narcotics and other controlled substances on game days to mask pain. The players claim they have suffered an assortment of illnesses since, ranging from addiction to chronic muscle and bone ailments to permanent nerve and organ damage.

Peterson, who made a sensationally quick return from torn knee ligaments and won the league's MVP award in 2012, says he's made sure he was completely informed about what he has been given throughout his career with the Minnesota Vikings, and in college at Oklahoma.

"It's a very unfortunate situation," Peterson said. "Anything I've taken to subside pain I knew what it was, and it was not ever forced on me. The side effects? I don't know if that was ever explained to them back then.

"I hope things work out in their favor. The NFL now and then, maybe this will give us insight into what happened back then. You make your own decisions, but if [repercussions] are not laid out to you ... "

Peterson heads into his eighth pro season as one of the most respected athletes in the NFL, if not all of sports. His return from a ravaged ACL in his left knee in December 2011 and nearly setting a league rushing record is considered one of the greatest comebacks by an athlete. He still gets compliments from his peers on his ability to rehab so well, so fast, then return and dominate.

"It's humbling to be able to have someone express to you on your rehab how it just inspired them to have a totally different mindset to overcome injury or obstacles in their life," said Peterson, 29. "It makes me feel good from a spiritual context, because life is so much more than football. It is inspirational to me to stand up to a challenge."

AP: Med Suit Is 'Unfortunate Situation'
Ben Goessling discusses comments made by Vikings RB Adrian Peterson referring to a suit being brought against the NFL by some former players over painkillers and medication they were given, as a "very unfortunate situation."
Related topics:
sportsespnadrian petersonmedicationdraftsueminnesota vikingspainkillersnflrunning backssuingleaguebacks
Copyright © 2020 ESPN Internet Ventures. All rights reserved.
More Videos
From CNN Newsource affiliates
TOP STORIES