WLS
By Evelyn Holmes
CHICAGO (WLS) -- Mother Nature almost took the wind out of the sails of the boats competing in the America's Cup Saturday afternoon.

Boats sat idle for hours after the official start of the historic race in Lake Michigan.

Spectators lingered at Saturday's America's Cup race after light winds forced a delay in the day's competition at Navy Pier.

"It will be very disappointing if we don't get at least one race in," said Charles Toemo.

They did hours after Saturday afternoon's much anticipated race began well after its scheduled 1:30 p.m. start.

Chicago marks the sixth stop in the World Series of sailing and the first time in the cup's 165-year history it'll be run on fresh water as Lake Michigan played host to the race.

"We, growing up, never went sailing, so to actually get into it and see it's just a pleasure to do it, it's calming, peaceful to be out on the water," said spectator Stacy Alexander.

Six countries, including defending champion Oracle Team USA, along with teams from New Zealand, Japan, France, Britain and Sweden, are competing to collect points towards the America's Cup final in 2017, which will be held in Bermuda.

Since Saturday's first race was delayed, the third practice race from Friday will now be officially counted as race one, putting Japan's team in the point lead.

"We're racing for real points and these things often come down to one point so it could be significant," said Ian Burns of Oracle Team USA.

Despite the delay, many say it was a great way to start off summer in Chicago.

"The boats have been really fantastic," said Ann Ilibasic. "I've never seen catamarans like this on the water."

"I was actually surprised that it was being held in Chicago," said David Contreras. "I think it's a great thing for Chicago to be holding this type of event."

Race committee officials are hoping that weather conditions will be more suitable for racing on Sunday. Temperatures are expected to be a little lower with winds a little higher.

There are also still plenty of tickets available for Sunday, with three races expected. 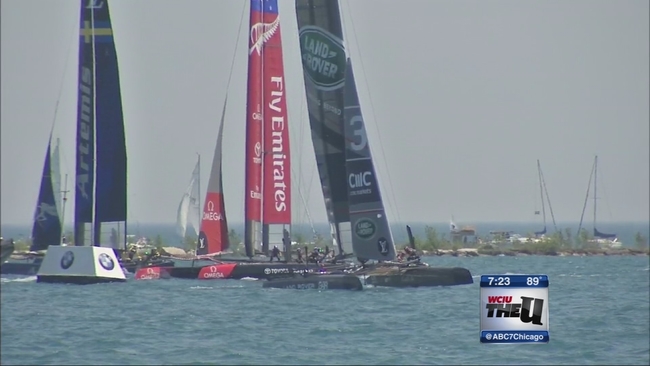