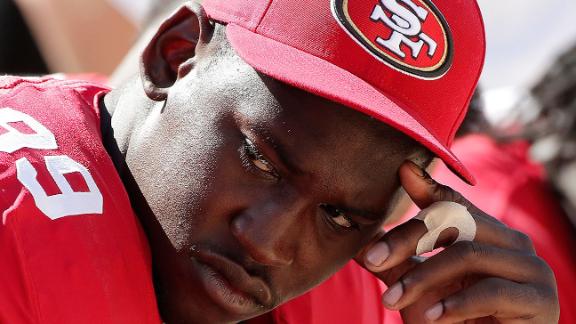 ESPN
By Ed Werder
The nine-game suspension for San Francisco 49ers pass rusher Aldon Smith wasn't reduced to allow him to play Sunday, as many expected. The reason, according to two league sources, is that while Smith did more than mandated in terms of community service, he did not fulfill the obligations assigned him in terms of his counseling protocol.

"Aldon fulfilled all of his obligations to be considered to return from his suspension early. The NFL chose not to make that decision," spokesman George Atallah said in a release.

So now the 49ers take on Drew Brees and the New Orleans Saints on Sunday in the Superdome without a pass rusher who has averaged nearly a sack per game in his career.

The 49ers have their worst midseason record under Jim Harbaugh (4-4) and will be playing the only quarterback in league history with multiple 5,000-yard passing seasons without their three top linebackers: Smith and NaVorro Bowman have not played this season and Patrick Willis is out with a toe injury.

Smith has 42 sacks in 43 career NFL games and ranks second to Jared Allen in compiling sacks the past three seasons. Brees has said that the Niners have proven capable of pressuring quarterbacks and being disruptive but they're not as fearsome without Smith.

Smith Didn't Fulfill Obligations
Ed Werder discusses the reports that Aldon Smith did not fulfill the terms of his counseling protocol and Smith's suspension will not be reduced to allow him to play against the Saints.