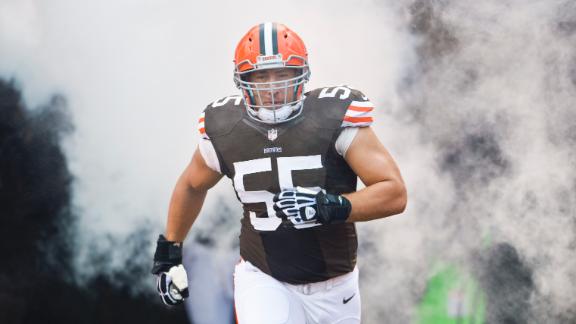 The Browns will have five days to match Jacksonville's offer to Mack who was designated with Cleveland's $10.039 million transition tag.

The deal will be designed to make it as difficult as possible for the Browns to match, sources told ESPN. If the Browns do not match, they will not receive any compensation for Mack, regarded by many as the NFL's premier center.

The deal will make Mack the NFL's highest-paid center by a wide margin, according to sources. Carolina Panthers center Ryan Kalil's contract averages about $8.2 million per year.

Sources close to Mack also say he wants to play this contract in Jacksonville, not Cleveland, which opted not to give him the long-term deal he wanted nor the franchise tag some thought he deserved.

But at this point, there is the framework of an agreement between Mack and the Jaguars on an offer sheet that still is being drawn up. The Jaguars and Mack have spent the better part of the past 48 hours crafting the deal, making it as unpalatable as possible for Cleveland to match.

Browns owner Jimmy Haslam has said he is optimistic that Mack will be a Brown "for a long time."

But it might not be so simple. In addition to keeping Mack, Cleveland also would like to work out long-term deals with players such as cornerback Joe Haden, defensive lineman Phil Taylor, wide receiver Josh Gordon and tight end Jordan Cameron. The Jaguars don't have as many players whom they need to re-sign long term.

Browns coach Mike Pettine said Wednesday afternoon the length of time Mack had taken to find a suitor had provided a tiny bit of optimism for the team.

"It's a situation that's very fluid," Pettine said. "I'm not that comfortable talking about it because it's an ongoing contractual thing. But I just think that anytime you're in a situation where's there a tag and I just think guys feel like ... nothing has happened so far, so there might be some optimism there.

"But it's something that's very fluid and changes day to day."

Pettine also said that all contingencies had been discussed about Mack.

"We remain optimistic that Alex Mack will be a Cleveland Brown for a long time," Browns owner Jimmy Haslam said Tuesday night at the premiere of "Draft Day," a fictional film about the Browns. "We want him to be. I think we've made it very clear that he's the kind of person, the kind of player we want in our organization."

Information from ESPN.com Browns reporter Pat McManamon and The Associated Press was used in this report.