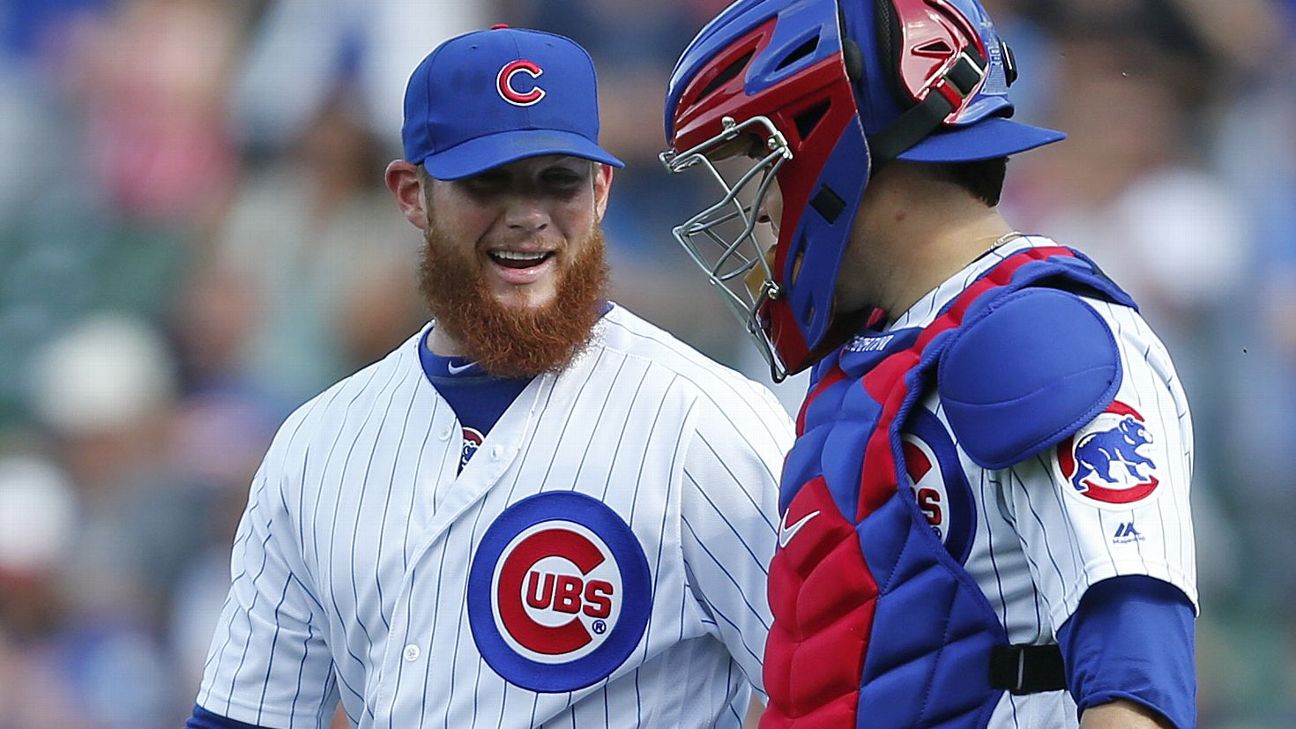 ESPN
By Jesse Rogers
CHICAGO -- A potential final piece to the Chicago Cubs' bullpen made it back to the majors Thursday, as the team called up new closer Craig Kimbrel, who earned the save in a 9-7 victory over the Atlanta Braves.

After Kimbrel made four appearances at Triple-A Iowa, the organization is hopeful he'll help the team improve on its 60% save-conversion rate. Here are some key questions about the man some might think is the savior for Chicago's shaky bullpen:

The Cubs are 39-3 when leading after eight innings. Does Kimbrel make that big of a difference?

He does, but it has only a little to do with the ninth inning. The team has been short an arm since the winter, so adding a good one -- in any role -- was a top priority. Of course, it doesn't hurt to add a Hall of Fame-caliber closer, considering the ninth inning can be a different animal, but the biggest benefit could come before the ninth. That's when Pedro Strop will pitch once again, and before that, tough righties Steve Cishek and Brandon Kintzler will see action. The Cubs have blown seven leads in the seventh inning or later, so moving everyone down a notch is where Kimbrel truly helps.

"When everyone is [available] on a nightly basis, the length of the bullpen gets pretty deep," Cubs manager Joe Maddon said.

How will Kimbrel be used initially?

First off, he'll pitch only three or fewer outs. So one inning will be the right-hander's max. "Remember when I got Aroldis [Chapman] and popped him in there for three-plus [outs] and I thought it was cool?" Maddon said. "But it wasn't."

"He'll be slotted, and really carefully. As we get to the latter part of September, as it's necessary, that's where you look at the four outs sometimes. I hope not five. ... He'll be a three-out guy."

What about using him on back-to-back days?

Kimbrel pitched on back-to-back days one time last week at Triple-A, so he's prepped for it. It'll be a day-by-day thing between him and Maddon.

"I need him to tell me on a daily basis how he's feeling," Maddon said. "I will listen to him. ... Sometimes, these guys actually feel better after a couple days of pitching."

Is he in major league-ready shape?

Kimbrel was throwing at a local high school in Florida before being signed, so it's not like he was mimicking big league situations -- hence the time in the minors. The Cubs called it his spring training and will treat him accordingly.

"Guys have a few more restrictions in April because they're easing their way into the season a little bit," team president Theo Epstein said. "It wouldn't be appropriate to go full throttle right off the bat given the long season ahead of him. And given that they are just getting up to speed.

"It makes sense to look at it like April, where you're not going to push the pedal to the metal right away, and be smart about it."

What are scouts or other executives saying?

One assistant general manager of another team interested in Kimbrel saw him throw before the 31-year-old signed with the Cubs and said: "I'm curious to see how the next few years play out. Our scout said the velocity looked good, command was off. Even then, it's hard to put any stock into it."

A scout who saw him more recently, at Triple-A, said: "Velocity was good, and in the few batters I saw, no one squared him up. But the real test is coming. This was just to see how his arm looked, and it was fine."

How did he look Thursday?

Kimbrel hit 95-98 mph on the radar gun but lost command against Dansby Swanson, walking him on four pitches.

"His stuff is still electric," new teammate Cishek said. "He had, what? Seven or eight strikes in a row. That's pretty amazing in his first game."

So how did his signature setup on the mound -- with his right arm dangling -- come to be?

"It all started with an injury," Kimbrel said. "I didn't want to put my arm behind my back anymore. Started to let it hang because I was getting a little bicep tendinitis. Over the years, it got out of control. It became something that was more of a stamp in my performance, I guess. Now it's just something that I do. It's how I separate from a happy, fun-loving guy to turning into what I want to be on the mound." 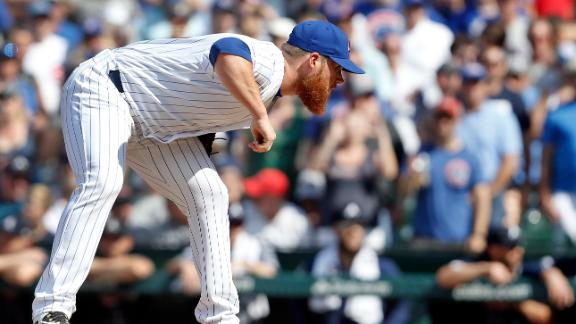 Kimbrel records save in debut with Cubs
Craig Kimbrel receives a standing ovation from fans at Wrigley Field as he steps onto the mound for the first time and then saves the game in a 9-7 win.
Report a correction or typo
Related topics:
sportsespnmlbcraig kimbrelchicago cubs
Copyright © 2020 ESPN Internet Ventures. All rights reserved.
More Videos
From CNN Newsource affiliates
TOP STORIES