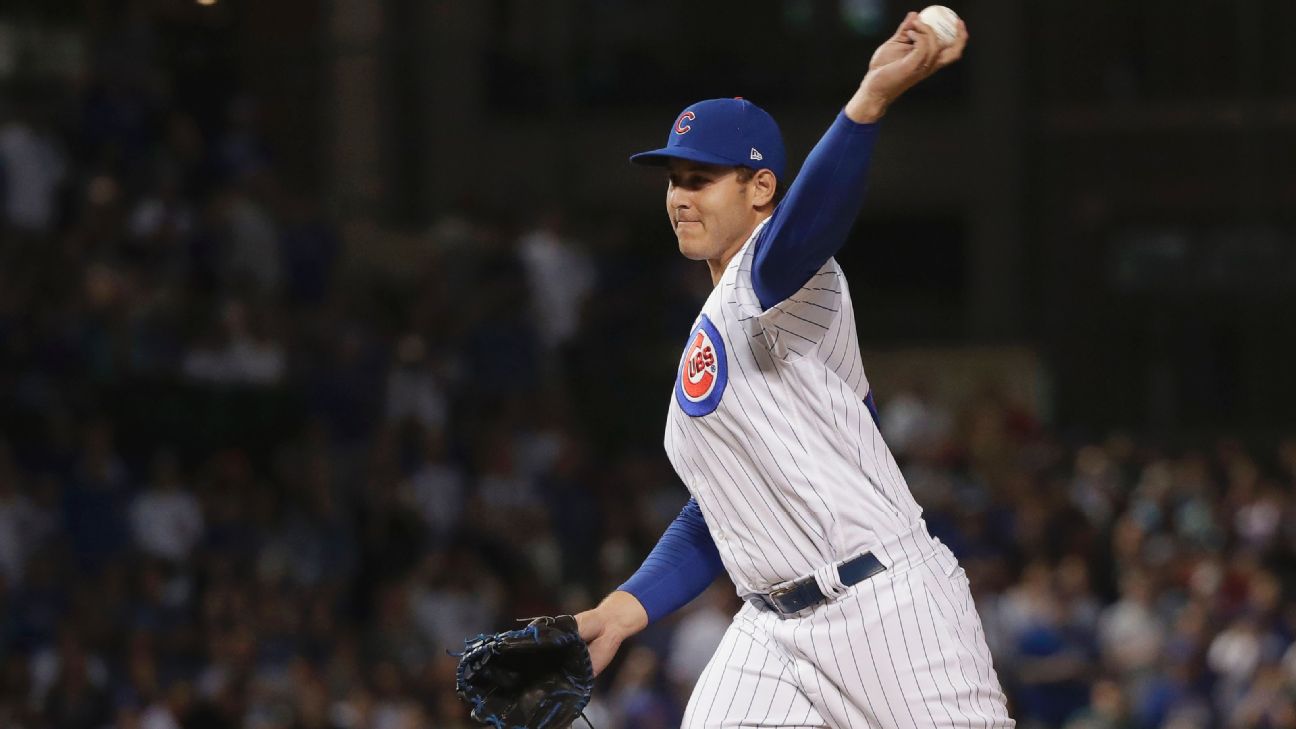 CHICAGO -- It provided for a lighter moment but underscored a larger issue with the Chicago Cubs. For the second time in four games, Cubs manager Joe Maddon used multiple position players to pitch in order to save his bullpen. The message being sent to the front office -- purposely or not -- in advance of the trade deadline next week is clear: The first-place Cubs need pitching.

"It was pretty crazy standing on that mound," first baseman Anthony Rizzo said late Monday after pitching the final third of an inning in a 7-1 loss to Arizona. "Obviously, it's unfortunate I have to pitch. We want to win."

Rizzo saw a dream come true, as he has been prepping to pitch for "six to seven years." But as soon as the standing ovation died down, Cubs fans probably realized the implications of the last few days: Cubs starters aren't holding up their end of the bargain. That has forced Maddon to his bullpen early and then to other options late, when the game is out of reach.

On Friday, he used three different position players -- including catcherVictor Caratini -- in an 18-5 loss to the Cardinals. Monday simply wasn't spot starter Luke Farrell's night, as he pitched just 3⅓ innings, giving up six runs. It's a narrative that has played out over and over again this season, as Cubs starters average about 5⅓ innings per start, good for the 20th-best in baseball.

"He definitely has the make-up to be here," Maddon said of Farrell before the game. "Stuff-wise, too. We've put him in a lot of tough spots. If you don't like some of the work that's happened, it's my fault...I'm curious to see him tonight."

Maddon could not have been more wrong, as Farrell gave up five first-inning runs, looking like the moment got to him. But he was starting only because the Cubs played a doubleheader on Saturday and needed an arm.

There's no excuse for how the rest of the rotation has pitched as a whole this season. They got a long start on Sunday by Jose Quintana but reverted back to their norm on Monday. Maddon was asked if he can keep relying on his bullpen -- or position players, for that matter -- all the way through October.

"That would be difficult because you're totally going to wear out the better part of your bullpen," Maddon responded. "That's my concern."

So, again, that sounds like a subtle message to his bosses. But can the Cubs bring in someone better than what they have? It might not be hard considering the way their starters are pitching.

"If you're going to make a move it has to be obvious, maybe not to the general public, but to the guys in that room, that this guy is going to be positively impactful to us," Maddon said. "Otherwise it can work against you."

The Cubs might simply have to take that chance, like they did with reliever Jesse Chavez last week. Perhaps they go back to Chavez's old team, the Texas Rangers, to pry Cole Hamels away. His splits on the road are worthy of trade consideration.

Other than that, there's still J.A. Happ of the Toronto Blue Jays, but few other smaller deals would be guaranteed upgrades -- even Happ and Hamels aren't guaranteed to be that.

Maddon doesn't want to keep relying on Triple-A call-ups. It's why the addition of Chavez could be a godsend, but the Cubs need more.

"You get into those head-banging games in September and you don't know how everyone (rookies) is going to react at that point," the manager stated. "We've had some guys step in and perform really well, but some of them have never done it under those circumstances before. I have no idea what they're going to react like."

Farrell was a great example. With at least one other option in Triple-A -- righty Duane Underwood -- the Cubs chose Farrell to start for them Monday, which failed miserably. And if you think this will be the last time Maddon uses position players rather than his "A" relievers, think again. The last thing he wants to do is blowout his main guys, like Pedro Strop, Steve Cishek, Justin Wilson or Carl Edwards Jr. The way the starting pitching is going, the Cubs can't afford a less-than-stellar, exhausted bullpen.

"When fatigue sets in, it's hard to reset," Maddon said of his top arms.

That's why Rizzo got his dream-come-true moment. It was good for some laughs, but no one will be laughing if Cubs starters don't find their groove -- or if the front office can't add a significant upgrade by July 31. A first-place team will be left to pitching infielders and catchers.

"It was fun," Rizzo said. "You have to have fun with it but at the same time try not to embarrass yourself."

The Cubs' starting rotation is doing a fine job of that on their own.