Antonio Brown on Facebook to 'quiet the noise,' will 'rise above' in '17 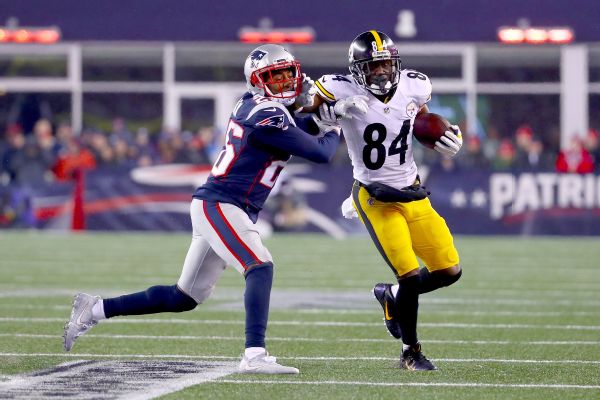 On Wednesday, the Pittsburgh Steelers wide receiver posted a 14-minute video from a private plane, this time to "quiet the noise" surrounding his career after a turbulent week.

Brown was disciplined internally by Mike Tomlin after using Facebook to broadcast from the locker room in Kansas City on Jan. 15 and catching the Steelers coach's profanity-laced postgame message.

After Sunday's 36-17 loss to the New England Patriots, NFL Network reported Brown was seen pouting after a touchdown. When quarterback Ben Roethlisberger was asked on his Tuesday radio show with 93.7 The Fan whether he discussed such a matter with Brown, Roethlisberger said his memory was hazy.

"He's one of the best in the business, and the plays that he makes and has made over his career are so special," the quarterback said. "I think sometimes that overshadows the extra stuff: the hands up, the arms up, the frustrations, the pouting, the things like that."

Brown said he was on his way to Chicago to watch Bulls star and friend Jimmy Butler play. He apologized again for the initial Facebook commotion and stressed he "didn't mean no harm." Then he revealed his personal slogan for 2017: "Rise above."

Brown enters the final year of a contract that pays him $4.71 million, a number he's unlikely to accept given his four consecutive seasons of 100 or more catches. But the Steelers -- Tomlin, in particular -- have made clear that Brown can be a distraction to the team.

There might be precedent for the reports of Brown's pouting. Over the past two seasons, Brown has publicly acknowledged that veteran teammates such as former tight end Heath Miller and Roethlisberger have told him to stop asking for the ball and play the team game.
Related topics:
sportsespnnflfacebook liveantonio brownpittsburgh steelers
Copyright © 2020 ESPN Internet Ventures. All rights reserved.
More Videos
From CNN Newsource affiliates
TOP STORIES