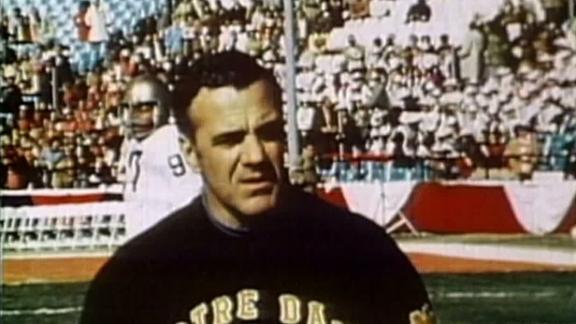 Ara Parseghian, who returned the Notre Dame football program to national prominence in the 1960s and '70s, died Wednesday. He was 94.

Parseghian's impact was immediate. The Fighting Irish won their first nine games during his initial campaign, and only a 20-17 loss to archrival Southern California in the season finale prevented them from winning a national championship. His quarterback that year, John Huarte, won the Heisman Trophy.

During the decade that followed, the "Era of Ara" would secure a privileged place in the storied history of Notre Dame football. Parseghian led the Irish to national championships in 1966 and 1973, joining Frank Leahy (four) and Knute Rockne (three) as the only coaches in school history to win multiple titles. Notre Dame's epic 24-23 victory over Paul "Bear" Bryant's top-ranked Alabama team -- the so-called "Game of the Century" -- in the 1973 Sugar Bowl capped a perfect 11-0 season and is considered the high point of Parseghian's career.

"I don't think I was a miracle man,'' Parseghian said in 2001. "Neither were Lou Holtz or Frank Leahy. We all found ways to win."

During his 11 years, Notre Dame went 95-17-4. Only Rockne (105 in 13 years) and Holtz (100 in 11 years) won more games for the Irish. All of Parseghian's teams finished in the top 15 in the Associated Press poll. He announced his resignation toward the end of the 1974 season, before the Orange Bowl, saying he would leave coaching for at least one year because of physical and emotional exhaustion. He was 51. He never coached again.

When Parseghian stepped down, he had established himself as part of the school's "Holy Trinity'' of coaches with Rockne and Leahy, but it wasn't sports that earned him an honorary degree from Notre Dame. He earned that for his efforts in fighting two diseases that took family members from him.

He served as the national chairman for the National Multiple Sclerosis Society, helping raise money and awareness for the disease that struck his sister, brother-in-law and oldest daughter, Karan. Three of his grandchildren -- Michael, Christa and Marcia -- died before the age of 17 from Niemann-Pick Type C (NP-C) disease, a rare genetic neurodegenerative disorder that primarily afflicts children and has no cure. In 1994, when the three children were diagnosed, Parseghian's family established the Ara Parseghian Medical Research Foundation, which has raised more than $45 million for NP-C research.

"Among his many accomplishments, we will remember him above all as a teacher, leader and mentor who brought out the very best in his players, on and off the field,'' said Notre Dame's president, the Rev. John Jenkins. "He continued to demonstrate that leadership by raising millions of research dollars seeking a cure for the terrible disease that took the lives of three of his grandchildren. Whenever we asked for Ara's help at Notre Dame, he was there.''

A native of Akron, Ohio, Parseghian was heavily influenced by Paul Brown, Sid Gillman and Woody Hayes, three of the game's greatest coaches. During his stint in the U.S. Navy during World War II, Parseghian was a fullback on the 1944 Great Lakes Naval Training Center team coached by Brown. After the war, he was Gillman's halfback for two years at Miami (Ohio) while also lettering in baseball and basketball.

He then rejoined Brown with the Cleveland Browns, playing two seasons (1948-49) before his professional football career was cut short by a hip injury. He returned to his alma mater in 1950, serving as the freshman-team coach for Hayes.

A year later, at age 27, Parseghian was named Miami's head coach after Hayes departed for Ohio State. Parseghian posted a 39-6-1 record during five seasons at Miami. In 1956 he was charged with breathing life into a moribund Northwestern program that had fielded a 0-8-1 team the year before he arrived. As he would do at Notre Dame later, Parseghian worked wonders with the Wildcats. His 1962 team was ranked No. 1 in the nation for two weeks.

In eight seasons at Northwestern, he went 36-35-1, including a 4-0 mark against Notre Dame, catching his future employer's attention.

"The entire Northwestern community is saddened by the passing of Coach Ara Parseghian," Northwestern athletic director Jim Phillips said in a statement. "I was privileged to get to know Coach Parseghian well during my time at Notre Dame; the impact he had on young men during his 25 years coaching at Miami, Northwestern and Notre Dame can not be overstated. Our love and thoughts are with his wife, Katie, and their family during this trying time."

Parseghian concluded his coaching career with an overall record of 170-58-6 and was inducted into the College Football Hall of Fame in 1980. He served as an analyst on college football broadcasts for both ABC and CBS from 1975 to 1988. 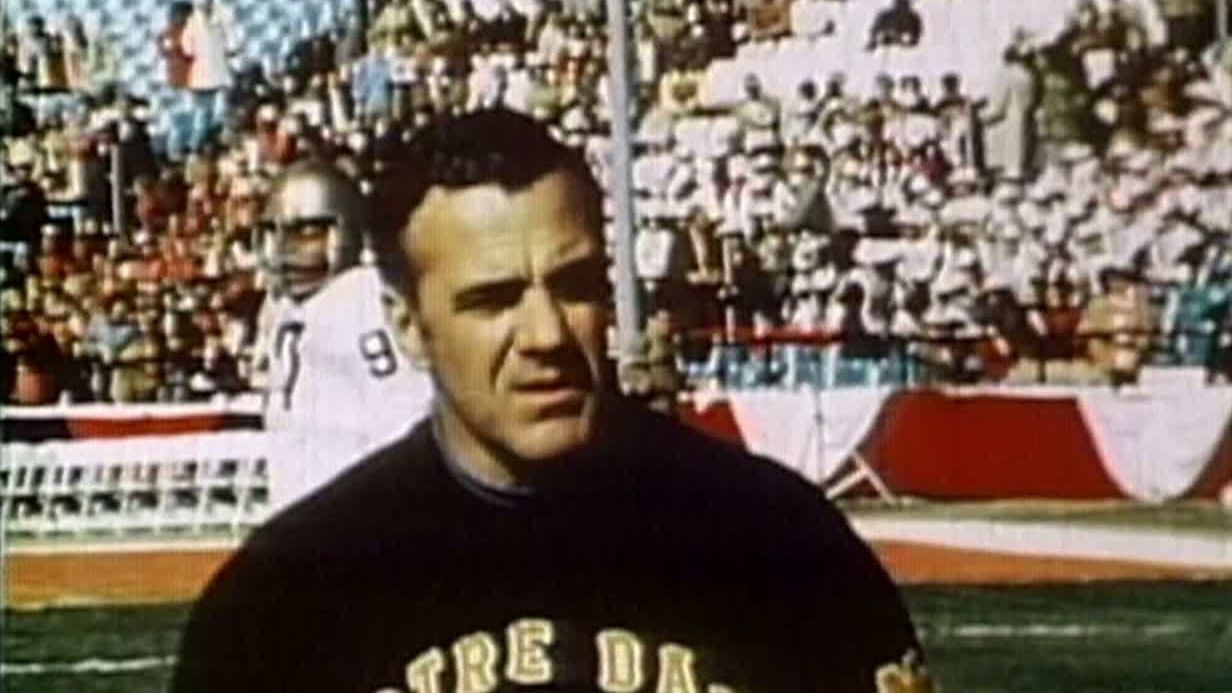