Are NHL coaches worried about players breaking the postseason bubbles? 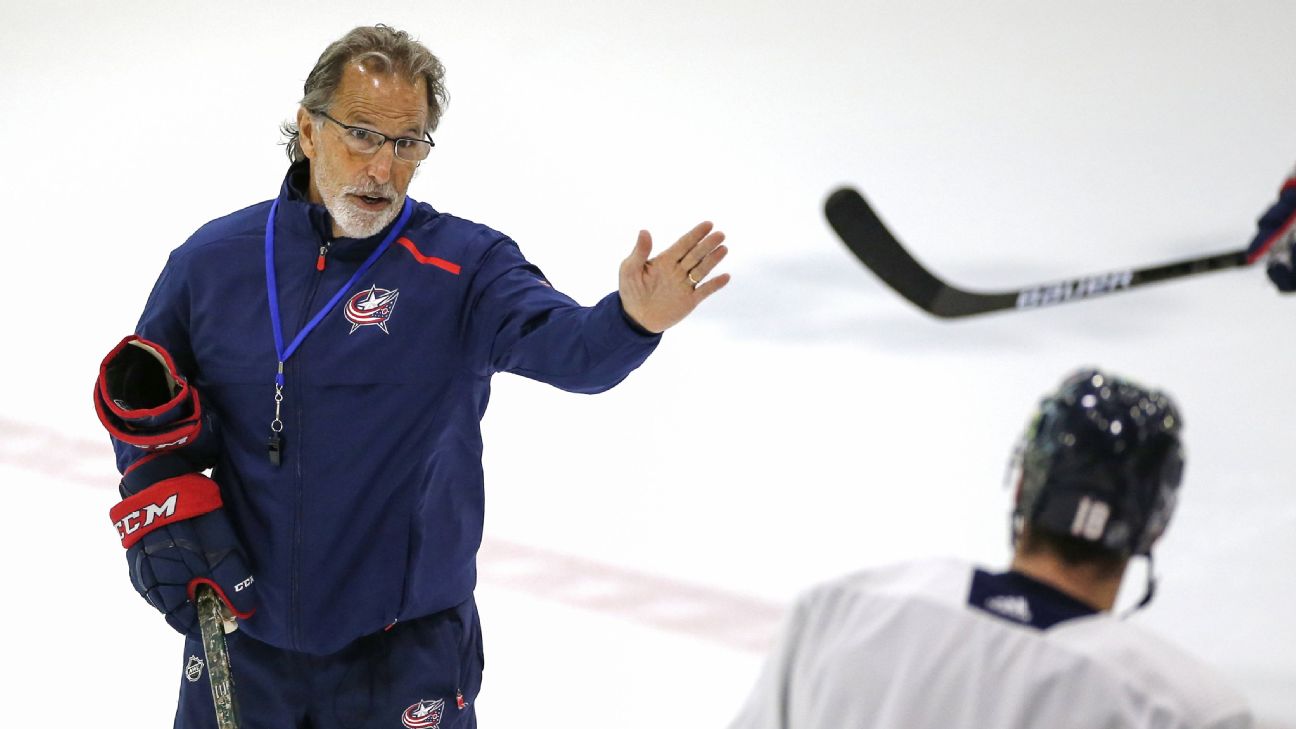 John Tortorella gathered around his Columbus Blue Jackets for their first day of training camp in the NHL's restarted season. The famously direct coach explained what he expected from them under the league's COVID-19 "return to play" protocols.

"We don't want a bunch of drama. We're trying to win a Stanley Cup," Tortorella said. "We understand the circumstances, and we should be honored that we're playing right now."


The Blue Jackets are one of 24 postseason participants moving into two "hub" cities starting Sunday, ahead of Stanley Cup playoff games being played inside two empty arenas. Toronto hosts the Eastern Conference and Edmonton hosts the Western Conference, and eventually, the conference and Stanley Cup finals. The postseason games are the fourth and final phase of the NHL's restart plan, and by far its most restrictive: daily testing for everyone inside the "bubbles" where teams will live, practice and play; strict quarantines for those who test positive; and restrictions on how and where players can enjoy their down time, as they are prohibited from leaving the bubbles without permission.

But the biggest change for the players in Phase 4? Consequences for violating those protocols. Potentially very harsh consequences.

Players who leave the secure zone without permission might be subject to consequences up to and including the removal from the bubble; or in other cases, strict quarantines of up to 10-14 days. But there are also potential penalties for teams whose players violate rules of the bubble, with a threat of fines and loss of draft picks.

"We want to make sure that people are taking it seriously. We want to ensure the protocols are being observed. We certainly outline penalties for people who are in violation of those protocols, up to and including expulsion from the bubble. And if you're not in the bubble, you can't play the games," NHL deputy commissioner Bill Daly told Sportsnet last week. "We're trying to keep everyone in the bubble as safe as they can be. For that to happen, people need to take stuff seriously."

The question is who makes sure that the players take these protocols seriously?

"We had a very strong and pointed conversation about this before we even went on the ice. About how we're going to handle ourselves. Out of respect for not only yourself, but the people around you. People with families and everything that comes with it. As we see, these cases keep growing," Tortorella told ESPN.

Some NHL coaches have indicated that they'll take an active role in ensuring the protocols are followed, while acknowledging the players' personal accountability here. "We stressed their responsibility and everyone's responsibility. I'm very confident moving forward. I think the NHL has done a very good job with the protocol, and now it's our jobs as teams to get to the bubble and get the opportunity to play,"Philadelphia Flyers coach Alain Vigneault said.


With the Blue Jackets having one of the youngest starting lineups of any team in the postseason, Tortorella said enforcing the protocols falls on the hockey operations department as well as the players.

"We have a very young hockey club. A lot of single guys. It's certainly a concern. Let's face it: This is a worldwide pandemic. It's a health situation which is separate from hockey. So we have to worry about the safety of these athletes first. But they do have to help themselves," he said. "It's going to be a little bit of both. I'm going to respect the older guys on the team. There's not many, but they have come to me and said they want to take control of this a little bit when they come to the hub city. We will watch it."

Vegas Golden Knights coach Peter DeBoer, on the other hand, is coaching one of the most experienced groups in the playoffs.

"I don't see any situations where chaperoning [is needed] with this group," DeBoer said. "We've got a veteran team. They know what's at stake. These guys have been skating in Vegas for five weeks, with the Strip 10 miles away and cases starting to climb on a daily basis. They've shown the maturity to make the right decisions. I have total trust in our group of players."

Nashville Predators coach John Hynes has faith that the players are the ones best suited to ensure the protocols are followed. "Our players are talking about it. If you look around at the articles being written, the players have been outspoken that it's on [the players] to police themselves," he said.

The NHL received good news this week: Out of the 2,618 tests administered to more than 800 players, there were only two new positive COVID-19 tests. Hynes says he believes that success in Phase 3 portends good things for Phase 4.

"We're all relying on each other. I think they're going through those protocols now, because this is probably more dangerous a time because you're not held as accountable as you will be inside the bubble, because you're on your own," Hynes said.

"I think it's going to be a big factor for everyone, having the teams police themselves. And we have to educate the players as best we can so that they understand what they can or can't do. I don't think there will be a lot of problems with NHL players. Once you get in that competitive situation, I'm sure they'll police themselves the right way."

Some players, however, believe that common sense is going to supersede any "policing" of one another as the teams enter Phase 4 on Sunday.


"We've had conversations, but I don't foresee having to tell anyone not to do something stupid, like go to a club during the playoffs. I don't think that's even on our radar," saidWashington Capitals defenseman John Carlson, in his 11th NHL season. "From the sound of it, our space is going to be very defined as far as spaces we can go to and spaces we can't. Me personally and our team, I think we know the focus that's needed throughout that time so that those distractions won't be a problem. But it's an open conversation that we will have when we have those defined rules on our team space or an open-air park or stuff like that."

Defenseman Keith Yandle of the Florida Panthers agreed. "Honestly, I don't think that's an issue at all. Obviously we've touched on it, but it goes without saying that we're there for a reason. We're there to play hockey. We've got a group of guys that know we have to win games, so that's the least of our worries going into this."

Mark Stone of the Golden Knights said that off-ice player discipline is something inherent in the playoffs, regardless of the pandemic protocols this postseason.

"Playoffs are a different animal, right? You go out on the road, you're in the hotel, you're hanging out together. I guess the only difference is that you don't get to see your family, which is going to be tough on guys. But [the family] isn't going to be in the city, so that's not going to be difficult," Stone said. "What's more fun than hanging out with your buddies every day, playing hockey? I don't think there's going to be an internal issue with that."

To that end, Panthers coach Joel Quenneville has a theory. The coach with the second-highest number of playoff games behind the bench in history -- 215, second to Scotty Bowman (353) -- says he believes that watching hockey is going to be the distraction that hockey players need to remain in the bubble.

"I think the entire league that's going [to the bubble] has some awareness about what the down time is going to look like. But we're going to see six hockey games a day. If you're playing that day, obviously, you won't have as many to see. But I think the theme is that everybody is going to be watching games and enjoying it. I think that's going to be the most time-consuming thing," Quenneville said.

If all else fails, there's perhaps the ultimate motivation for a player under the protocols: Staying healthy, staying compliant and thus staying on the ice for this unprecedented months-long tournament for the Stanley Cup.