Athlete raising money to compete in Deaflympics in Turkey 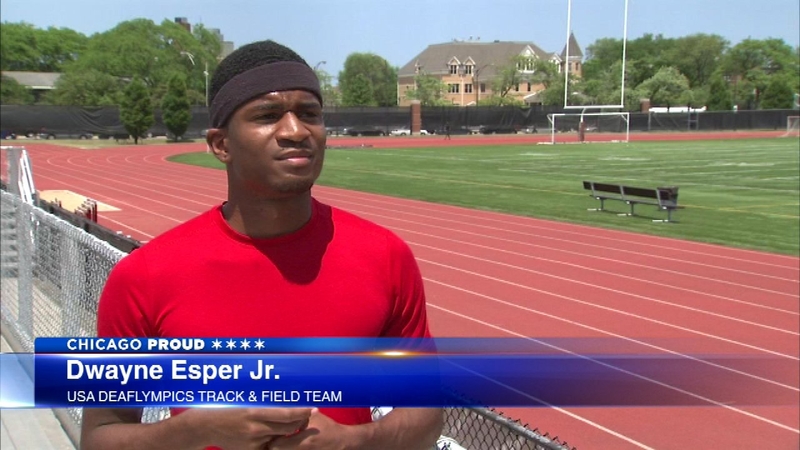 A Harper College student athlete is looking for support as he prepares goes for the gold as part of the U.S. track and field team in the Deaflympics.

Dwayne Esper Jr., of Calumet City, started running track when he was in the 6th grade at Illinois School for the Deaf.

Now, he is training to return to Deaflympics, which will be held in Turkey this year, for the second time.

"Four years ago, I went to the Deaflympics. It was in Bulgaria. Sophia, Bulgaria and it was a really wonderful experience for me," Esper said via sign language.

"I was able to bring home four different medals. One gold, two silver and one bronze," Esper said.

This year he will be competing in the same races, ready to take off as soon as he sees the light flash.

"One thing they didn't have was the starting guns. Instead they had special signals and the Deaflympics had lights in front of the runners. So when we were on the starting blocks we could see the lights and know when it was time for us to go," Esper said.

Anitra White, Esper's mother, said she's proud of his accomplishments but fundraising to get him to Turkey has been hard.

"It's been rough because I'm a single parent," White said. "So I've been doing side jobs like cleaning homes or sometimes Uber."

Deaflympics athletes do not receive funding from the United States Olympics Committee so all athletes are required to fundraise their trip to the games.

"I think it would be a lot of fun and it would be nice to have their support. I would be thrilled, inspired and I could feel the love for the USA," Esper said.

Esper's goal for this year's games is to bring home four gold medals and inspire others like him to compete in the Deaflympics.

Esper's coach said any additional funds raised will be used to help other team members reach their goal.