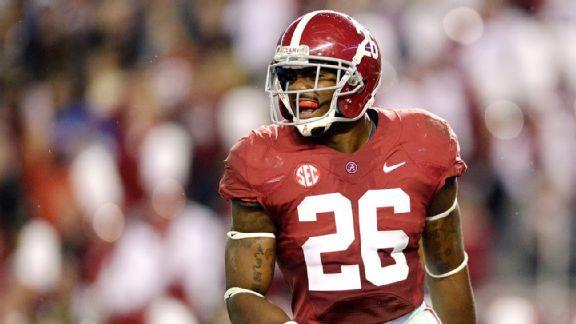 Cooper had 16 touchdown catches this season, the most by an SEC player since Reidel Anthony, and set the conference record with 18 in 1996.

Cooper is the No. 4 overallprospect in the 2015 NFL draft class and top wide receiver, according to ESPN's Scouts Inc.

"There's nothing Cooper doesn't do really well, and he's probably more explosive than he looks because his movement is so precise," ESPN's Mel Kiper said of Cooper, who is ranked third overall on his Big Board. "He separates with ease, has a good sense of how to find space against a zone and will make contested catches. His work rate is legendary and will be a big selling point."

Collins was a first-team All-SEC choice after leading Alabama in tackles with 103. He was second on the team with 10 passes defended.

Yeldon, meanwhile, had 932 rushing yards and 10 touchdowns, just missing his third straight 1,000-yard season. Yeldon is the draft's No. 6 running back prospect and No. 49 overall.

Information from ESPN.com's Chris Low was used in this report.