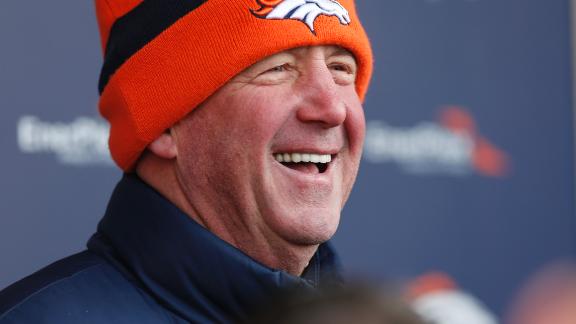 ESPN
By Michael C. Wright
John Fox is the new coach of the Chicago Bears, the team announced Friday.

He agreed to a four-year deal just four days after he and the Denver Broncos parted ways, sources told ESPN. There will be a news conference Monday at noon ET.

Fox becomes Chicago's third head coach since 2012. He takes over for Marc Trestman, who was fired Dec. 29, along with general manager Phil Emery, after posting a 13-19 record over two seasons. The Bears have missed the postseason for four consecutive years.

"I would say he's an easygoing guy, but he's still old-school football," Bears linebacker D.J. Williams, who played for Fox in Denver, told Chicago's WMVP-AM. "It's very hard to find a blend of that, somebody who's like real hard-nosed, but laid-back at the same time."

Guard Kyle Long is looking forward to playing for Fox.

"Met Coach Fox night before I participated in the combine in passing at dinner. Now he's my coach. Was a very likable dude!! Let's roll," he wrote on Twitter.

Fox produced a record of 46-18 over four seasons with the Broncos, leading the club to a postseason in every year of his tenure, while winning the AFC West in each of those years.

Fox joined the Broncos in 2011 after spending nine seasons as head coach of the Carolina Panthers (2002-10).

He inherits a talented, yet underachieving offense coming off a season in which it produced the top completion percentage (65) in franchise history, while ranking No. 2 in the club's record book in completions (396), passing attempts (609) and passing touchdowns.

Still, question marks exist at the quarterback position. Jay Cutler set the team's single-season record in completions (370), and hit career highs in completion percentage (66), and passing touchdowns (28) in 2014. However, he also tied Philip Rivers for throwing the most interceptions in the NFL with 18. Cutler also lost six fumbles to lead the league in turnovers. As a result, Trestman benched the quarterback for a Dec. 21 loss to the Detroit Lions in favor of Jimmy Clausen.

Under Fox, the club hopes to regain its identity on defense. But talent deficiencies exist, along with difficult decisions about how to proceed with aging veterans such as cornerback Charles Tillman and linebacker Lance Briggs.

The defense produced a few bright spots in cornerback Kyle Fuller (led all rookies with four interceptions and tied for the NFL lead among rookies with three forced fumbles), and defensive end Willie Young (10 sacks), along with defensive tackles Jeremiah Ratliff and Stephen Paea (combined 11.5 sacks).

But the unit needs an infusion of talent in several areas, namely the secondary, as the Bears ranked 30th against the pass and allowed opposing quarterbacks to rack up a passer rating of 101.7.

It's unknown what Fox plans to do with the assistants remaining from Trestman's staff. It's likely some will interview for positions on the new staff.

Former Panthers quarterback Jake Delhomme played for Fox from 2003 to '09 when the coach led the franchise to its only Super Bowl appearance (2003), and he believes Fox will make an instant impact.

"You're talking about a coach that takes Carolina to their only Super Bowl in franchise existence," Delhomme said Wednesday during the "Carmen & Jurko Show" on ESPN 1000. "He goes to Denver and wins four division championships. Obviously, people will say, 'Well of course, he had Peyton Manning.' Well, he had Tim Tebow for the first one. I'm not sure how talented that roster was when he first got there, and they won a playoff game. So I think you bring an instant winner as soon as you walk in, and one that is going to reflect well with the players."

ESPN NFL Insider Adam Schefter and The Associated Press contributed to this report.