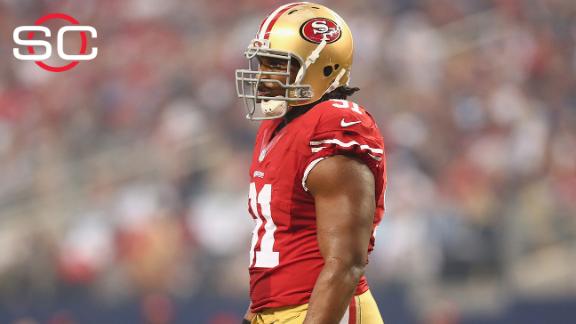 CHICAGO -- The Bears have released Ray McDonald after the defensive lineman was arrested earlier Monday in California on suspicion of domestic violence and child endangerment.

According to Santa Clara police, McDonald was arrested at approximately 7 a.m. local time Monday after officers said he "physically assaulted the victim while she was holding a baby."

The Bears signed McDonald to a one-year contract in late March knowing it was a gamble given his history of legal issues during his time with the San Francisco 49ers.

"We believe in second chances, but when we signed Ray, we were very clear what our expectations were if he was to remain a Bear," Pace said in a statement released Monday afternoon. "He was not able to meet the standard and the decision was made to release him."

McDonald's attorney, Steve Defilippis, told ESPN's Josina Anderson that the Bears were too hasty in releasing him.

"The bottom line is I think Chicago is moving too fast on this," he said. "They have absolutely no information at this point. They should be waiting to hear what the real facts are."

McDonald's deal with the Bears was worth $1.05 million but included no guaranteed money.

Police were called to an apartment in Santa Clara, California, at 3:48 a.m. Monday but discovered McDonald had left. He was later found at a home in San Jose.

The San Jose address at which McDonald was arrested is that of a house that belongs to ex-49ers teammate Justin Smith, according to property records. Smith has not been implicated in the incident in any way.

NBC Bay Area reported that McDonald rents an apartment in Santa Clara for his former fiance and their baby. According to NBC Bay Area, McDonald went out with friends Sunday night and asked the woman to leave when he decided to return to the apartment.

Defilippis confirmed that the accuser in this case is McDonald's former fiance, who also was the alleged victim in an incident in August.

McDonald's mother, LaBrina McDonald, told NBC Bay Area that McDonald's ex-fiance gave birth to his son in March and that he sometimes visited the newborn when he was in California.

Defilippis told Anderson late Monday afternoon that his client was still in custody and he had yet to speak with him.

"I don't really know his version, because I haven't been able to actually meet with him yet," Defilippis said.

"We're going to work on getting him bailed out right now, and once that's arranged, then I'll probably know a little more."

McDonald was released from jail after posting bail later Monday, pushing past TV cameras and reporters without answering questions as he got into a taxi.

McDonald is no stranger to off-field controversies. San Francisco released McDonald in December because of what 49ers general manager Trent Baalke called a "pattern of poor behavior."

His release from the 49ers came just a month after the Santa Clara County district attorney's office announced it had declined to file charges against McDonald in a separate domestic violence investigation stemming from an arrest on Aug. 31 while celebrating his 30th birthday at his Northern California home.

Prosecutors cited conflicting versions of what happened, a lack of verifiable eyewitnesses and a lack of cooperation by the alleged victim, McDonald's then-fiance, in explaining their decision not to pursue charges in the domestic violence investigation. The NFL also announced that McDonald would not be subject to league punishment.

But his troubles continued.

In March, McDonald filed a defamation lawsuit against a woman who had accused him of rape. McDonald says security camera footage will show a consensual sexual encounter occurred in his hot tub.

Police say the woman doesn't recall any sexual encounters and reported blacking out after drinking alcohol and falling at McDonald's home. She said she went to police after waking up naked next to McDonald. The Santa Clara County district attorney is considering whether to file criminal charges.

Despite the off-field history, McCaskeyacknowledged in March that he changed his mind about McDonald after their face-to-face meeting and a phone call to McDonald's parents.

"We have a 96-year tradition of doing things a certain way, of bringing a certain type of player into our team," McCaskey said at the time. "And those were my concerns going into the conversation with Ray. But I think you look at every situation individually. You try to find out as much information as you can that's reliable to make the best decision you can about whether to offer a player the privilege of becoming a Chicago Bear.

Any fallout in Chicago over McDonald's release?
Louis Riddick breaks down whether any of the Bears' front-office personnel responsible for signing Ray McDonald are at risk now that he has been released.
Related topics:
sportsespnray mcdonaldarrestnflsan francisco 49ersdomestic violencechicago bears
Copyright © 2020 ESPN Internet Ventures. All rights reserved.
More Videos
From CNN Newsource affiliates
TOP STORIES