Big Ten conference presidents and chancellors voted Tuesday to postpone all fall sports seasons, including football, amid the coronavirus pandemic with the hopes of playing in the spring.

Big Ten commissioner Kevin Warren told ESPN on Tuesday evening that when the conference released its schedule only six days ago, he reiterated the season might not happen -- a message he has been consistent with.


"Because we announced a schedule does not mean we're going to play," he said. "As you gather information on a daily basis, that's what day-to-day is. We have to still plan. By organizing schedules and making announcements, we made it very clear -- I thought I was very clear in that it's a day-to-day decision, and we're going to do what's best for the health and wellness of our student-athletes."

Warren said the decision was based on the uncertainty that still surrounds the coronavirus pandemic.

"It's a combination of where we are in our testing, where we are in our rapid testing, how is contact tracing actually defined?" he told ESPN. "There's a whole litany of issues. We have incredible policies and procedures in place and our schools, we have 14 schools in 11 different states. People are doing the best they possibly can, but when you go from the acclimation period to getting ready to put on pads and contact, and you look at the overall numbers during this global pandemic as far as caseloads, they have not decreased, they have gone up.

"Trends have not improved, they've become worse. You add that up, and you're getting ready to go into more formal practice, it's just a level of not only concerns, but unknown risks are large. When you're dealing with the health of human beings, it's serious."

On Sunday, ESPN first reported that Big Ten presidents, following a meeting on Saturday, were ready to cancel the fall sports season, and they wanted to gauge whether commissioners, university presidents and chancellors from the other Power 5 conferences -- the ACC, Big 12 and SEC -- would fall in line with them.

Officials with the ACC and SEC have indicated they plan to proceed with seasons this fall, but it's unclear whether the Big Ten's decision will change those plans. As for the Big 12,it's not entirely clear what the conference's intentions are, as some of its member schools seem to be divided on whether to play this fall or try to go in the spring.

In making its decision, the Big Ten said it relied on the medical advice and counsel of the Big Ten Task Force for Emerging Infectious Diseases and the Big Ten Sports Medicine Committee.

"Our primary responsibility is to make the best possible decisions in the interest of our students, faculty and staff," Morton Schapiro, the chair of the Big Ten Council of Presidents/Chancellors andNorthwesternUniversitypresident, said in a statement.

Nebraska, afterCornhuskerscoach Scott Frost on Monday said his program is prepared "to look at any and all options"to play this fall, issued a joint statement Tuesday saying, "We are very disappointed in the decision by the Big Ten."


"We have been and continue to be ready to play," said the joint statement from Nebraska chancellor Ronnie Green, president Ted Carter, athletic director Bill Moos and Frost. "Safety comes first. Based on the conversations with our medical experts, we continue to strongly believe the absolute safest place for our student athletes is within the rigorous safety protocols, testing procedures, and the structure and support provided by Husker Athletics.

"... We hope it may be possible for our student athletes to have the opportunity to compete."

When asked what the discussions among the presidents were like, Warren told ESPN that "we made the decision together," but conceded it was a move that won't be universally applauded.

"When you make complicated decisions in your life, you never expect everyone's going to be happy," Warren said. "These are complicated decisions. We have 14 world-class academic institutions with alumni around the world in 11 different states who are passionate about athletics, and we have almost 10,000 student-athletes."

Warren, who on Tuesday said he took Frost's statements "as a point of passion," would not say whether the vote to cancel the fall season was unanimous.

"Our schools, we don't always agree, but people understand ... that we will be together in the Big Ten," Warren said.

Michigan coach Jim Harbaugh also expressed disappointment in the decision. "Our student-athletes and coaches want to compete," he said in a statement. "They have committed, trained and prepared their entire lives for this opportunity, and I know how much they're disappointed at this time. I share in their disappointment today."

Ohio State athletic director Gene Smith said he and university president-elect Kristina Johnson were in agreement to delay the start of the fall sports seasons instead of postponing to the spring.

"This is an incredibly sad day for our student-athletes, who have worked so hard and been so vigilant fighting against this pandemic to get this close to their season," Smith said. "My heart aches for them and their families.President-elect Johnson and I were totally aligned in our efforts to delay the start of the season rather than postpone. I am so grateful to her for all her efforts in support of our student-athletes and a traditional fall season.


"As an institution and as an athletic department, we have a responsibility first and foremost to care for the health, safety and wellness of our students and staff, and I believe we have done that successfully."

Smith confirmed to ESPN that the school won't pursue opportunities in other conferences for a fall season.

It's still unclear how the decisions by the Big Ten and Pac-12 will impact the College Football Playoff. Any decisions about the structure or format of the four-team playoff are made by the CFP Board of Managers, which comprises 11 university presidents and chancellors -- including Penn State's Eric Barron and Washington State's Kirk Schulz.

"It's too soon to say what the implications will be," CFP executive director Bill Hancock told ESPN. "We will wait for guidance from the CFP board and management committee."

"The COVID-19 pandemic has impacted every aspect of our lives, both personally and professionally. For many students and staff, it has brought anxiety and stress and we are all looking forward to a time when things begin to look and feel more 'normal,'"Wisconsinchancellor Rebecca Blank and athletic director Barry Alvarez said in a joint statement.

"For many months, we had hoped that the return of fall collegiate sports might be an opportunity to restore some sense of normalcy and provide brighter moments. ... Even so, today's decision by the Big Ten to postpone the fall 2020 sports season is the correct one."

ESPN's Adam Rittenberg and Heather Dinich contributed to this report. 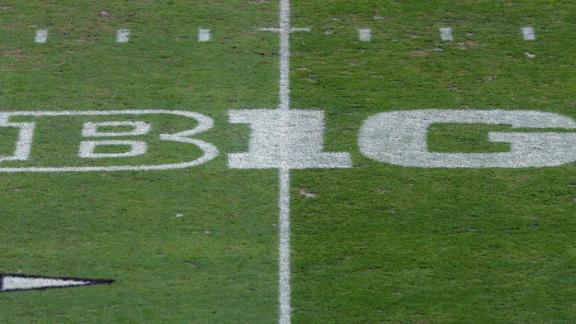