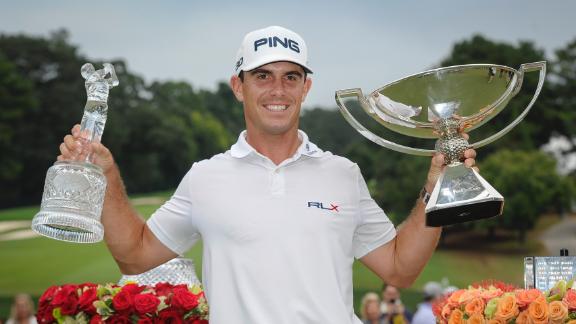 ATLANTA -- Just three weeks ago, Billy Horschel had every reason to start looking ahead to next season.

He had missed the cut in the first FedEx Cup playoff event to fall to No. 82 in the standings. He only had two top 10s all year, scant evidence that he was on the verge of something special. He was weeks away from becoming a father.

What followed was the best golf of his life, and a payoff that was more than he could grasp.

"I'm not sure life can be better than this," Horschel said.

Horschel capped off his improbable playoff run Sunday at East Lake by pulling away from Rory McIlroy early and holding off Jim Furyk late. He posted his 12th straight round in the 60s -- a 2-under 68 -- to win the Tour Championship by three shots and claim the FedEx Cup and its $10 million bonus.

That's what these FedEx Cup playoffs are all about -- who can get the hot hand over the last four tournaments.

Horschel took that to a level only Tiger Woods can appreciate. No one had ever won the FedEx Cup starting the playoffs lower than No. 19. Horschel started at No. 69. But he was the runner-up in Boston, a winner in Denver and he cashed in big in Atlanta.

Those three weeks of prize money and the FedEx Cup bonus were worth nearly $13.5 million.

"I remember flying home and talking with my wife and she said, 'You're probably just waiting for the season to be over and start a new season.' I sort of was," Horschel said. "But at the same time, I knew my game was in the right shape and I just needed to get out of my own way. I needed to allow my golf game to show."

It was just too late to show Ryder Cup captain Tom Watson.

Horschel's timing was perfect for the FedEx Cup, not so much for the Ryder Cup. Watson made his three captain's picks after the Deutsche Bank Championship -- Horschel was the runner-up -- and he had no reason to select a guy whose only PGA Tour win was last year in New Orleans.

Now the Americans head to Scotland without the hottest hand in golf.

McIlroy will have to settle for a year worth more than $10 million -- two majors, a World Golf Championship and undisputed No. 1 in the world. He lost his way with a tee shot into the water for double bogey on the par-3 fifth, and self-destructed with three sloppy bogeys around the turn. Three consecutive birdies late in the round gave him a 71 and a tie for second place with Furyk, who closed with back-to-back bogeys for a 69.

This was the Billy Horschel show all week -- all month.

Clinging to a one-shot lead, he calmly sank an 8-foot par putt on No. 13 to avoid his first three-putt of the week and stay one shot ahead of Furyk. The biggest blow came at the 16th hole when Horschel drove right into the trees, wisely pitched back to the fairway and saw his approach spin back 30 feet short of the cup.

The putt never looked as if it was going anywhere but in.

"It came off and got up on top of that ridge and I said, 'This looks good.' And it went in, and it was huge," Horschel said. "I knew Jim was nipping at my heels and everything, and that was a big, big putt."

Furyk came up short with his approach on the 17th and made bogey to fall two shots behind, and he three-putted the 18th trying to force a birdie.

That made things easy on Horschel, who drilled his tee shot onto the green for a two-putt par to finish at 11-under 269.

Horschel shared hugs and a few tears with his parents. His wife was home in Florida.

"Hopefully, she's not going into labor right now," he said.

Not to worry. Brittany Horschel tweeted a picture of her smiling with her hands on her belly.

- brittany horschel (@britt_horschel) September 14, 2014McIlroy's birdies at the end earned him a little extra cash. He wound up No. 3 in the FedEx Cup, which paid an additional $2 million.

Chris Kirk, who started the Tour Championship as the No. 1 seed in the FedEx Cup, closed with a 68 and tied for fourth with Justin Rose (69) and Jason Day (69). Kirk was second in the FedEx Cup and earned a $3 million bonus.

It was the second time McIlroy had the biggest year without winning the FedEx Cup. He is a shoo-in to be PGA Tour player of the year, as he was in 2012. He was in better position this time -- tied for the lead through four holes -- until Horschel pulled away and the world's No. 1 player ran out of steam.

Needing to start picking up ground on the 600-yard ninth hole, he blasted his drive so far right that it wound up a foot away from the out-of-bounds fence of the practice range. There was no way out. With his caddie and a rules official ducking in the holly bushes, McIlroy slashed out with a wedge over the bushes and through a gap in the trees that only he saw. Next, he had a mobile TV truck lowered to ground level to get his third into the fairway. But his wedge came up short, and he made bogey.

Two more bogeys later, he was five shots behind and out of the mix.

"I just got really frustrated and just couldn't muster the energy to try and get something going again," McIlroy said.

Billy Horschel Captures FedEx Cup
Billy Horschel beat out Rory McIlroy and Jim Furyk for a 3-shot victory in the Tour Championship and an $11.4 million payday.

Horschel Actually Dreamed Of FedEx Cup Win
FedEx Cup champion Billy Horschel talked with ESPN.com's Bob Harig about his amazing run of back-to-back wins and how he dreamed of winning the FedEx Cup months ago.