Blues-Blackhawks, Capitals-Penguins among few good rivalries left in the NHL 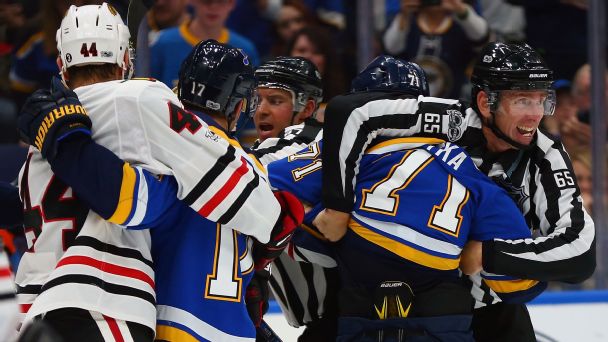 What's the best rivalry in the NHL right now?

Greg Wyshynski: Is it completely and utterly lopsided? Yes. Has its intensity been inflated by a decade of media-driven narratives? Certainly. But are the Washington Capitals and the Pittsburgh Penguins still the gold standard for hate-fueled hockey rivalries in 2017? Absolutely. At this point, the Penguins could spot the Caps three wins and 10 goals, and Washington would still find a way to blow a playoff series with Pittsburgh. But that's part of the charm: One team that can't stop sabotaging itself and that intensely loathes the other; and one team that's too busy cleaning its championship rings to care about their rival. It's unrequited animosity for the Capitals, simmering for decades as this feud stretches back to the days of the Patrick Division. As Ben notes below, the concept of "rivalries" in the NHL has been diminished because of changes to playoff formats and -- not coincidentally -- a dramatic decrease in fighting and increase in player-safety awareness. The days of blood-soaked ice under the skates of the Detroit Red Wings and Colorado Avalanche exist only on YouTube. But among the modern feuds, the one between the Penguins and Capitals remains the most consistently compelling -- even if, at this point, we're just waiting to see if Alex Ovechkin can kick the football before Sidney Crosby yanks it away. Again.

Chris Peters: There still seems to be a fair amount of animosity between the Chicago Blackhawks and St. Louis Blues. They always seem to have fun regular-season games with plenty of drama. Even as they move further away from their last Stanley Cup title, Chicago still has that aura of a champion, while St. Louis feels more like the team with something to prove. That dynamic always intrigues me. The Blues beating Chicago in the first round of the 2016 Stanley Cup playoffs, in an intense series, felt like more of a turning point. Including the Blues' 5-2 win from Wednesday night, St. Louis and Chicago are extremely close head-to-head since 2015-16. While Chicago also has growing rivalries with the Minnesota Wild and Nashville Predators, there's just something a little bit meaner about what's happening between St. Louis and Chicago, and that goes for other sports as well. These games continue to feel big each and every time these Midwestern powers meet. At this stage of the rivalry, the dynamic might be shifting even more, which could inject new life and new animosity into an already strong matchup.

Ben Arledge: The truth is, NHL rivalries have been relatively dormant in recent years. That's not to say they no longer exist, but intense hatred between clubs has eased over the last decade. The classic New York Rangers-New York Islanders and Boston Bruins-Montreal Canadiens rivalries have lost luster and just don't feel like they once did. So, I'll lean to the Battle of Alberta here as the league's best rivalry, at least in its potential. The rivalry between the Edmonton Oilers and Calgary Flames has been reinvigorated over the past year, with both teams in playoff discussion and even Stanley Cup contention. Calgary addressed its goaltending issue (yet again), this time with the addition of Mike Smith, and despite the league's third-oldest roster (average age of 29.2 years old, obviously influenced by the Jaromir Jagr signing), the Flames have exciting youth up front in the form of Johnny Gaudreau, Sean Monahan, Matthew Tkachuk and Sam Bennett, and a stout defense. Edmonton, meanwhile, has the sixth-youngest roster, led by Connor McDavid and Leon Draisaitl, and its own stellar goalie in Cam Talbot (even if he hasn't played like it this season). That youth and talent tees up multiple years of good competition in Alberta. Furthermore, with the league's playoff format -- no matter how ridiculous it is -- Calgary and Edmonton have a good shot to see each other in the playoffs, and the rivalry has the chance to return to the heated times of the 1980s and 1990s.
Report a correction or typo
Related topics:
sportsespndivisionchicago blackhawkswashington capitalsedmonton oilersst louis bluesnhlpittsburgh penguinseastern conferencecalgary flamesrivalriessurpriseswestern conference
Copyright © 2020 ESPN Internet Ventures. All rights reserved.
More Videos
From CNN Newsource affiliates
TOP STORIES