Bo Ryan to retire after next season 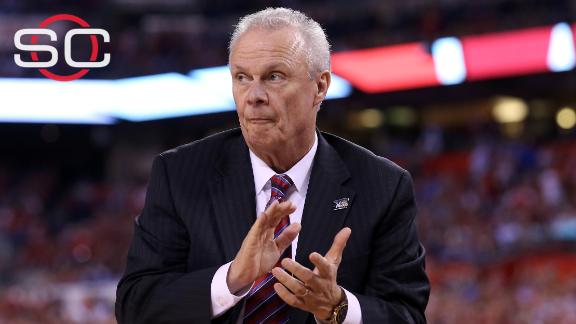 Wisconsincoach Bo Ryan, who is coming off back-to-back Final Four appearances, will retire after next season, he announced Monday.

Ryan, 67, said in a statement that he will coach this season and then step down. His hope is that longtime assistant Greg Gard succeeds him in Madison.

"Back in the spring, in the days after the national championship game, [athletic director] Barry Alvarez and I discussed the possibility of me retiring," Ryan said in the statement. "I've always been told that is not a decision to make right after a season is completed. Barry thankfully encouraged me to take some time to think about it and I have done that. I considered retiring this summer or coaching one more season.

"I've decided to coach one more season with the hope that my longtime assistant Greg Gard eventually becomes the head coach at Wisconsin. I am looking forward to another year with our program, including our players, my terrific assistant coaches, our office staff and everyone who supports Wisconsin basketball here in Madison, around the state and across the country."

A source told ESPN that Ryan, who is 357-125 in his 14 seasons at Wisconsin and has taken the Badgers to the NCAA tournament each year, is not stepping down due to health reasons.

Ryan informed the team and staff of his decision Monday morning. A number of Wisconsin sources told ESPN's Andy Katz that they anticipated he might have retired this spring had the Badgers held on to beat Duke in the national championship game.

"It was kind of shocking to me," said Sam Dekker, a forward on last year's team just drafted by the Houston Rockets. "I knew it was coming at some point but I didn't know it would be this soon. It's shocking. If it's the best decision for him and if it will make him happy, then so be it. It's going to be different seeing a different coach on the sideline, that's for sure.

"He built that program up into one of the powerhouse college basketball programs in the nation. It's basically because of him and the players he brought there. College basketball, you can mention him with names like Izzo, Coach K, Bob Knight ... Old-school guys, very competitive guys that you respect. They're going to lose a big part of college basketball."

Prior to taking over at Wisconsin for Dick Bennett, Ryan spent two seasons at Milwaukee. He was at Division III Wisconsin-Platteville for 15 seasons.

In Ryan's tenure with the Badgers, they have won better than 74 percent of their games every season.By comparison, in the 14 seasons prior to his arrival in Madison (1987-2001), Wisconsin won less than 54 percent of its games and reached the NCAA tournament only five times.

The Badgers beat Kentucky in the Final Four, ending the Wildcats' run toward a perfect season at 38 games -- the longest win streak entering a Final Four since seeding began in 1979. Wisconsin lost to Duke in the national championship game.

"He is very tough-minded," Gard said before the Final Four game against Kentucky. "And I think that whole thing in terms of street toughness, the understanding that there's an appreciation for what you have. The willingness to never quit, never give up. He came from a family that had limited resources financially, so you have an appreciation for what it takes -- what hard work really is.''

Frank Kaminsky, the national player of the year for 2014-15 who was recently drafted ninth overall by the Charlotte Hornets, offered his reaction to Ryan's announcement in a social media post Monday evening:

Bo Ryan to retire after one more season
Jeff Goodman reacts to the news that Wisconsin men's basketball coach Bo Ryan will retire after the 2015-16 season.