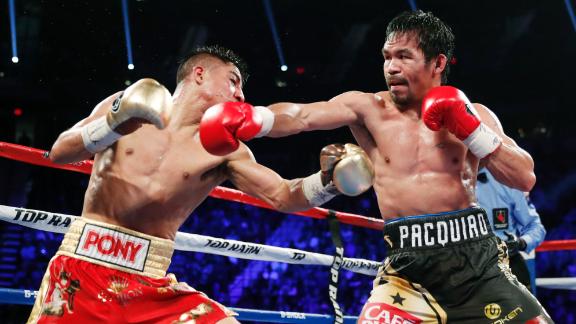 ESPN
By Dan Rafael
Top Rank promoter Bob Arum said newly crowned welterweight world titleholder Manny Pacquiao will "definitely" fight again in the spring and said "I give it 75 percent" that he will face Floyd Mayweather in a rematch.

Pacquiao, elected to the Philippines Senate in May, came out of a brief retirement to handily outpoint Jessie Vargas on Saturday night at the Thomas & Mack Center in Las Vegas to regain the welterweight belt he lost to Mayweather by unanimous decision in May 2015 in their record-shattering mega fight that generated a record $600 million in total revenue.

Mayweather so far has remained in the retirement he announced after beating Andre Berto in September 2015, but the signs are there that it may not last much longer. Mayweather showed up with his daughter at ringside Saturday to watch Pacquiao, who invited him to the fight.

Mayweather rarely attends fights not put on by his Mayweather Promotions, and his appearance immediately ignited speculation about a rematch between the two biggest stars of their time and two of the best in boxing history.

Making the first fight dragged on for a tedious five years of "will they or won't they." A second fight wouldn't take nearly as long to put together if Mayweather wants it, Arum said.

"Floyd came to the fight and he was very friendly with [Top Rank president] Todd [duBoef] and some of our staff," Arum told ESPN on Monday. "Now, that doesn't mean that the fight will happen, but if it does, it won't take a long time to make because the animosity that was there before the first fight is gone. There's no more animosity between the camps."

Arum has since settled a $100 million antitrust lawsuit he filed against Al Haymon, Mayweather's adviser.

"It was so tense last time, but it won't be that way now because everyone can get along," said Arum, who promoted Mayweather for most of his career before they had a falling out that Haymon was in the middle of.

"Like everyone else, I'm guessing there will be a rematch. He did come to the fight," Arum said. "I give it 75 percent. Do I know it's gonna happen? No. Do I know if Floyd wants the fight? No. I know nothing more than the public knows at this point and what I observed."

Arum saw what everyone else saw, that as Pacquiao stood in his corner awaiting the opening bell on Saturday he looked right at Mayweather, pumped his fist and smiled. And he also saw Pacquiao, belt slung over his shoulder after the decision was announced, climb the ring post in the corner directly in front of Mayweather and smile at him, after which Mayweather gave him the thumbs-up.

"It doesn't mean the rematch will happen, though, but it means the tension is gone," Arum said. "The bad words are not there. If the fight does happen it will be easier to make."

Pacquiao said leading up to the fight with Vargas that he was unsure if he would continue to box. He had a rigorous schedule before the fight, balancing training camp with his Senate duties. But he looked sharp and won easily. Arum said he is making plans for a spring fight at Pacquiao's urging.

There is no fight for which Pacquiao (59-6-2, 38 KOs), who turns 38 next month, can earn anything close to what a rematch with Mayweather would pay him. And if Mayweather (49-0, 26 KOs), who turns 40 in February, elects to exit retirement and seek to improve his record to a perfect 50-0, Pacquiao looms by far as his most lucrative match. They are the only fighters in history to earn nine figures for a single night's work. Pacquiao made around $150 million and Mayweather around $250 million.

Arum said he has to plan Pacquiao's next fight around his Senate schedule, as he did for Saturday's bout, which took place during a recess.

"After the fight in the ring, Manny told me that the Senate will be in recess for eight weeks between the middle of March and the middle of May," Arum said. "I don't think for a Mayweather fight that Manny would want to train like he did for Vargas by training in the Philippines and coming over [to the United States] two weeks in front of the fight.

"It's not the worst-case scenario for him to maybe train for two weeks in the Philippines and then come here and do the last week six weeks during that recess. But he's definitely fighting in the spring, so I have to plan for dates.

"Manny volunteered the information to me about the schedule. It has to do with the schedule, regardless of whether he is fighting Mayweather or somebody else."

While Arum does not know for sure if Mayweather will return, the promoter said Haymon told him recently that he probably would.

Arum said he and Haymon spoke a few months ago when he was negotiating for Pacquiao to fight Adrien Broner, the former four-division titleholder and a Haymon client.

Ultimately, Broner did not agree to the money and Vargas got the fight with Pacquiao instead, but Arum said during that conversation he asked Haymon if he thought Mayweather would come back and "he told me he thought the chances were better than not that he would come back."

If Mayweather does come back, there really is only one fight that makes sense -- and a lot of dollars -- to do it for. 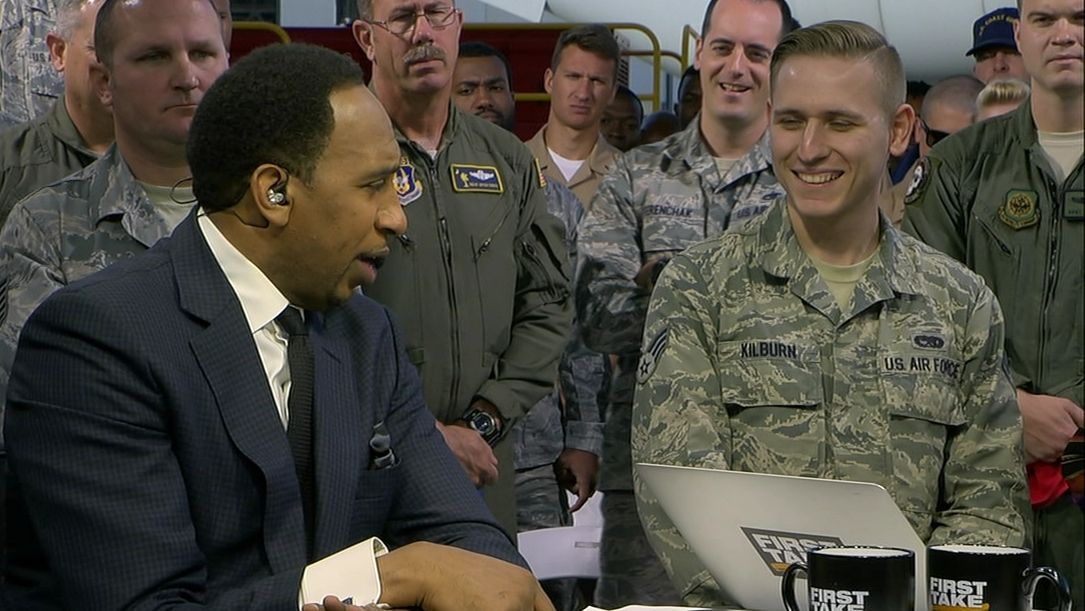 Mayweather wanted to be seen at Pacquiao fight
Stephen A. Smith suspects Floyd Mayweather was trying to garner interest for a rematch between him and Manny Pacquiao when he sat ringside to watch Pacquiao's bout against Jessie Vargas. 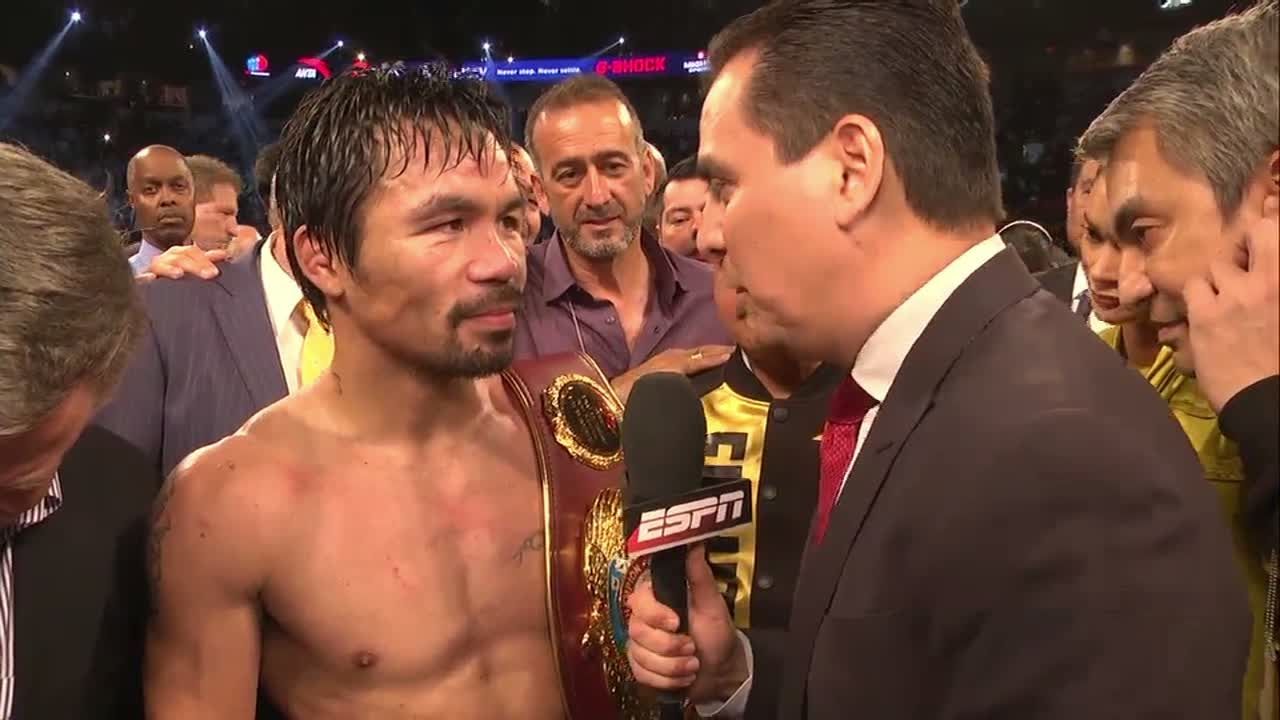